Washington, D.C. — A new poll shows that West Virginia residents resoundingly agree that it is time for term limits on Congress. The survey, conducted by McLaughlin & Associates, found that 83 percent of the West Virginia voters polled support an amendment to the Constitution limiting the number of terms Senators and House Representatives may serve in the U.S. Congress.

The pollsters also found that support for term limits is broad and intense across all political, geographic and demographic groups. The results indicate that 81% of those polled also want their state representative and state senator to vote in favor of an amendment proposing convention to implement term limits on members of Congress.

For West Virginians, this survey is more than fodder for a discussion at the water cooler. It will be rocket fuel needed to launch the Term Limits Convention resolution through the West Virginia State Legislature this upcoming session. The resolution is expected to be filed by House Delegate Jeffrey Pack (Raleigh-28) when the legislature reconvenes in January.

Pack is dedicated to sponsor the resolution because, as he states, “Its time to drain the swamp of politicians who are out of touch with hard working West Virginians. The best way to do that is by establishing term limits on Congress.”

The measure must pass both chambers of the West Virginia legislature in order to count towards the 34 states needed to trigger the term limits proposal convention.

This poll of 400 likely general election voters in West Virginia was conducted on November 17th, 2018 through
November 19th, 2018. 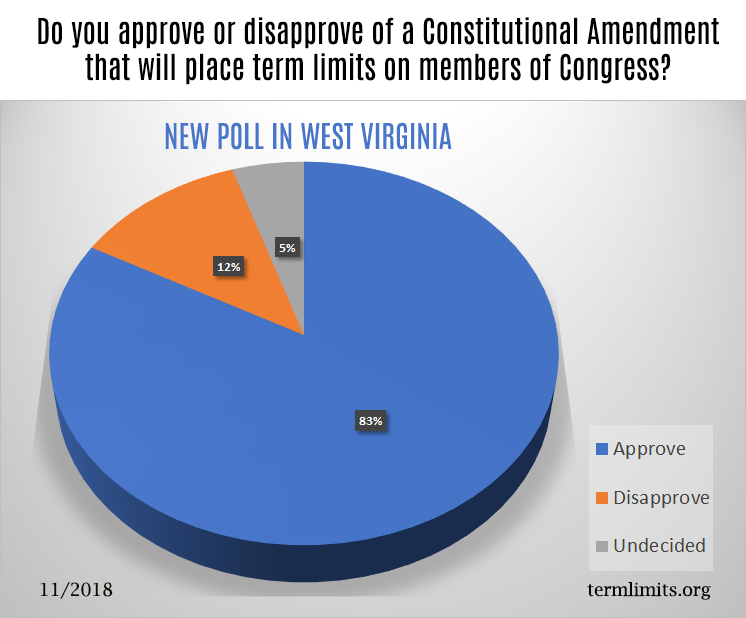