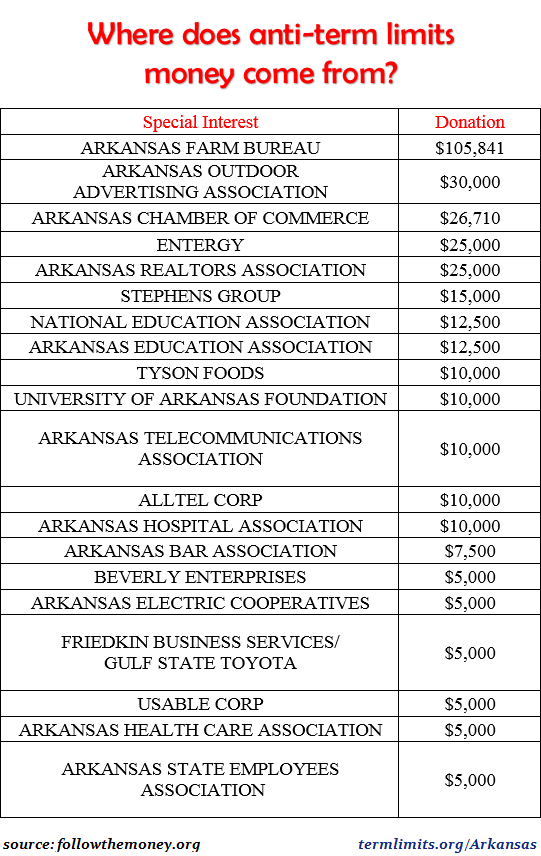 If you’ve read any anti-term limits editorials lately, you’re probably familiar with the remarkable claim that lobbyists love term limits. After studying dozens of these articles published in various states over the past few months, here’s what I’ve noticed:

To get to the bottom of it, I decided to follow the money. After all, if lobbyists are such big fans of term limits, they would have given most of their precious campaign contributions to pro-term limits initiatives, like ours.

Turns out that isn’t the case at all. Take Arkansas, where in 2004, politicians foisted an anti-term limits amendment on the people. As you can see in the chart to our left, the state’s biggest lobbying associations collectively pumped hundreds of thousands of dollars into the ballot committee aiming to DEFEAT term limits.

The same occurred in California in 2012. Lobbying groups threw their financial might behind the anti-term limits effort. In fact, I’ve found zero evidence — in any state — of industry group lobbyists supporting term limits. Those who lobby for cleaner and more transparent government, while few in number, can be a different story.

It makes sense. Lobbyists and the special interests they represent don’t want to see their co-dependent relationships with career politicians come to an end.

Newspaper columnists who repeat the “lobbyists” myth without proper research are therefore doing a disservice to honest debate. Their theory is presumably that all these lobbyists who supported the weakening of term limits wanted to weaken their own power — a ridiculous notion.

Next time you see this myth in print, don’t hesitate to call it out. A letter to the editor can go a long way toward informing readers and forcing a newspaper to set the record straight.

When I was a lobbyist, I opposed term limits for representatives. I truly believed it was wrong for the voters to be limited in their choices. But that wasn’t the only reason I opposed them. Like almost every lobbyist I knew, I didn’t want to have to build relationships with new members constantly. A representative who stayed in office for decades, and was a friend, was worth his weight in gold. But permitting people to rule for decades is a recipe for disaster. Is there really a difference between a permanent Congress and a president for life? Representatives should be allowed to serve for three terms of two years, senators for two terms of six years.”

Nick Tomboulides is the Executive Director of U.S. Term Limits.