The year was 1995, and the case was U.S. Term Limits v. Thornton. With assistance from USTL, the citizens of 23 states had just passed laws putting term limits on their members of Congress. That meant just under half of all congressmen were term-limited, and Congress would soon be forced to propose a term limits amendment applying to everyone.

But it was not to be. A self-interested politician in Arkansas and his donors made a court challenge to void that state’s law. Others followed. After the Arkansas Supreme Court ruled against us, we took it all the way to the U.S. Supreme Court (SCOTUS).

SCOTUS opined that since the Constitution sets forth the criteria that determines the requirements for Senators and Congressional Representatives, only the Constitution can limit the terms of Congress members.

The Court decided, in a 5-4 split decision, that citizens are not allowed to term limit their own members of Congress using state laws. They threw out 23 states’ term limits laws in one day. Justice Scalia disagreed, ruling for term limits as part of the dissenting minority.

This was without doubt a low point for term limits. The Court seemed to have shut down every realistic avenue to fight careerism in Washington.

But hidden in their decision was a silver lining: “State imposition of term limits for Congressional service would effect such a fundamental change in the constitutional framework that it must come through a constitutional amendment properly passed under the procedures set forth in Article V.”

Did you catch that? While they had closed the door to term-limiting Congress with state laws, they had opened another by saying it can be done through amendment to the Constitution. That’s the strategy USTL is pursuing today.

The Term Limits Convention uses “the procedures set forth in Article V” to achieve congressional term limits. The Convention is not a state law like those the Court struck down – it is a constitutional call-to-action that triggers automatically when 34 state legislatures have demanded it. And, the states don’t need the permission of Congress to propose a Constitutional amendment.

The Founders recognized that the Constitution may have flaws and would have to adapt as the country grew. As a matter of fact, George Mason refused to sign off on the Constitution because it did not include a “declaration of rights.” The first 10 amendments, now known as the “Bill of Rights,” as well as the 27 amendments that followed, were all proposed by Congress through Article V. James Madison and Alexander Hamilton wrote about the beauty of Article V, stating it made it difficult but not too difficult, to propose corrections to the Constitution. Madison, Hamilton, and Mason felt strongly that both the federal government and the state legislatures should have equal power to propose amendments, therefore, the “conventions of states” option was important for them to include.

Article V of the U.S. Constitution

The Congress, whenever two thirds of both houses shall deem it necessary, shall propose amendments to this Constitution, or, on the application of the legislatures of two thirds of the several states, shall call a convention for proposing amendments, which, in either case, shall be valid to all intents and purposes, as part of this Constitution, when ratified by the legislatures of three fourths of the several states, or by conventions in three fourths thereof, as the one or the other mode of ratification may be proposed by the Congress; provided that no amendment which may be made prior to the year one thousand eight hundred and eight shall in any manner affect the first and fourth clauses in the ninth section of the first article; and that no state, without its consent, shall be deprived of its equal suffrage in the Senate. 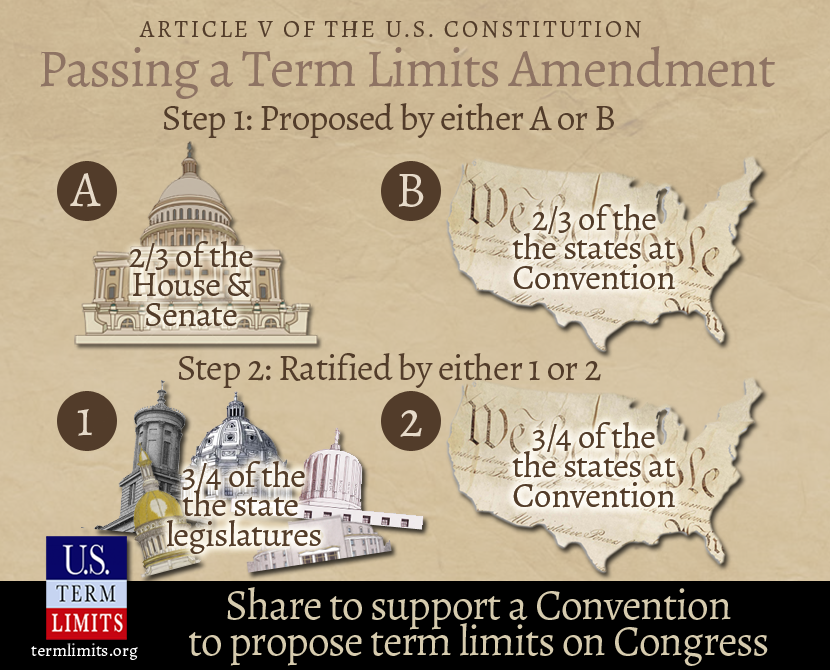 The Current Stage of the Process

Term limits are a non-partisan issue supported by a whopping 82% of the population. There have been strides in both Congress and by the states towards imposing term limits on Congress.

We believe that the rise of political careerism in modern Washington is a drastic departure from what the founders intended of our federal governing bodies. To effectively ‘drain the swamp,’ we believe it is past time to enact term limits for Congress. ~ Florida Governor and Former Congressman Ron Desantis

U.S. Senator Ted Cruz of Texas (Senate Joint Resolution 3 [SJR3]) and Rep. Ralph Norman of South Carolina (House Joint Resolution 12 [HJR12]), introduced and sponsored a resolution limiting terms in office for both members of the House and the Senate. It must garner the support of 3/4 of both houses by December 2022.

More than 500 applications have been made by the states asking for an Article V Convention on various topics. To date, a proposal convention of states has never been called. However, 3/4s of the states in convention did ratify the repeal of the prohibition amendment in 1933. Currently, the Article V movement with the most traction is the Balanced Budget Amendment which needs only seven more states in order for Congress to call an Article V Convention. Fifteen states have passed Article V convention applications for a limited government that includes imposition of term limits on Congress. One state, West Virginia that has not passed the multi-inclusive resolution but has passed a term limits exclusive application. In total, five states have passed the term limits exclusive application, WV, FL, MO, AL and WI. For the latest on our progress, please visit termlimits.com/progress.