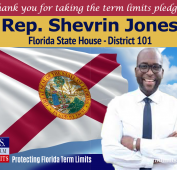 Delegate Michael J. Hough (R-3B) announced that he will introduce a term limits amendment when the Maryland General Assembly reconvenes in January 2014. The amendment proposes a three term (12 year) limit for both Delegates and State Senators. In order to refer an amendment to voters in Maryland, it must pass both chambers with a three-fifths vote. Here’s

In 2014, Montana legislators debated House Bill 601 and House Bill 639 in the State Affairs Committee. Both bills would have doubled term limits to 16 years in one seat. THREAT LEVEL:     DEFEATED. Thanks for your hard work!     Montana’s term limits law survived its first attempt at a repeal in 2004, when 70 percent of

According to recent data from the University of Illinois at Chicago, Illinois is the third most politically corrupt state in the country. Since 1976, it has averaged 51 public corruption convictions per year. These numbers indicate that term limits are needed more than ever to restore turnover and accountability to prairie state government. Term limits have emerged in

January 2014: Representative Myron Neth (R-Liberty) has introduced HJR 41, an anti-term limits amendment. It is identical to his bill in the last session, HJR 4, which failed to receive approval from the State Senate. If passed, Neth’s measure would double term limits on state House and Senate members from eight years in one seat to

PRINCE GEORGE’S COUNTY TERM LIMITS Aspiring career politicians were at it again in 2014 to weaken term limits for themselves, and forcibly surrendering voter power. The voters fought back and thwarted this encroachment that was not only brought upon by crony commissioner’s, but developers had a big role in influencing the legislature; surprise. Voters squeaked

Battles have been waged by politicians, activist judges, special interests and lobbyists across the nation who seek to remove the will of the people. In order to maintain term limits at the state level, your help is needed.  See your state below???  Get involved… Not sure how?  Just email us by clicking here, and we

Help Save Ohio’s Term Limits April 2015: The Ohio Constitutional Modernization Commission — which is made up entirely of legislators, lobbyists and their appointees — is set to recommend to the Legislature that term limits be weakened from 8 years in one seat to 12. Any term limit longer than eight years distorts the