Tuesday July 9th, Don’t Touch Term Limits! will bring a 10-foot tall carved horse to Jackson as part of a ‘Citizen Cavalry’ rallying against attempts by state legislators and lobbyists to alter the Michigan term limits.

10:00 AM – Near the county building at W Wesley and S Jackson 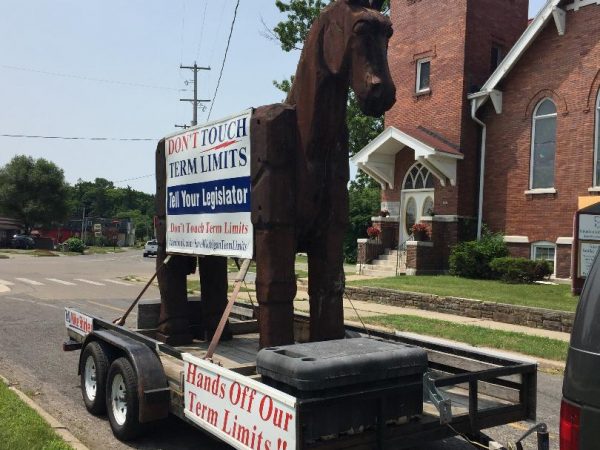 “This is straight from the horse’s mouth,” said Scott Tillman, State Coordinator for Don’t Touch Term Limits! “We want politicians like Mike Shirkey to know the people of Michigan love our term limits. Term limits were introduced by citizens not politicians, and politicians have no business meddling with the people’s term limits.”

“Term limits have only increased in popularity since the people of Michigan enacted them in 1992,” Tillman explained. “We expect legislators to focus on the business of our state. We don’t need our legislators getting together with those who consider themselves the elite of Michigan discussing how to increase their power by ending term limits.”

State Sen. Mike Shirkey of Clarklake recently went on record at the Detroit Regional Chamber Mackinac Policy Conference discussing repealing term limits. The conference took place at the Grand Hotel on Mackinac Island and was attended by those who consider themselves the elite of Michigan, high priced lobbyists, special interests, and politicians. Tickets to the conference were over $2,000 for members and over $3,000 for non-members (not including travel or lodging).

“The opposition to term limits has always been planned and funded by lobbyists,” said Tillman. “Everyone knows term limits weaken lobbyists. When lobbyists and politicians are together and term limits comes up, you get weeping and gnashing of teeth.” The same group had a similar discussion at the 2008 Detroit Regional Chamber Mackinac Policy Conference.

Recently term limits have been shown to increase voter turnout. Because of term limits Michigan has the most competitive legislative elections in America.  According to Tillman interest for changing term limits comes from lobbyists, “It is a myth that term limits give power to lobbyists, every time term limits is on the ballot lobbyist money pours in against term limits. Lobbyists will do almost anything to increase their influence and they oppose term limits because their power comes from relationships with lawmakers.”

“Lobbyists hate having to work to ingratiate themselves with new legislators instead of sitting back reaping the benefits of long-term relationships. The people will oppose any move by legislators to change our term limits law,” added Executive Director Kurt O’Keefe.