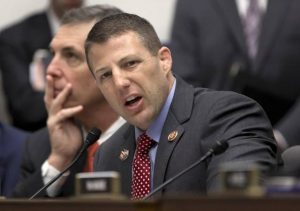 Oklahoma Congressman Markwayne Mullin hates to be reminded that he works for the people.

“You say you pay for me to do this? That’s bull crap. I pay for myself,” Mullin told constituents at a town hall last week in Jay, Oklahoma (CLICK HERE for video). “I paid enough taxes before I got here and continue to through my company to pay my own salary. This is a service. No one here pays me to go.”

Except that isn’t true. Taxpayers do pay Mullin’s $174,000 annual salary plus benefits, which is 480% more than the median take-home pay for the average American. Since tax dollars fund more than just congressional salaries, Mullin isn’t correct to suggest his money is earmarked only for himself.

This isn’t the first time Mullin has thumbed his nose at the people. When he ran in 2012, Mullin made two separate term limits pledges to constituents. First, he promised to leave Congress after three terms in office. Second, he promised while in office to co-sponsor the U.S. Term Limits amendment to term limit the entire House and Senate.

Mullin has since reneged on BOTH pledges, by filing for re-election to a fourth term and by never sponsoring the U.S. Term Limits bill. Mullin is an aspiring career politician who will say and do anything to stay in power, even if it means breaking his word.

While most members of Congress at least pretend to be public servants, Mullin has expressed his belief that he is his own boss as an elected official.

Here’s what Mullin fails to realize: his behavior is making a better case for term limits than his pledges ever could. He is showing all of America what an entitled, entrenched and dishonest politician looks like. And that will only rally citizens to our cause.

U.S. Term Limits isn’t waiting on the bums in Washington to throw themselves out. We have launched the Term Limits Convention to allow the American people to bypass Congress and implement a term limits amendment using the power of the states.

The Convention bill has passed in Florida and is halfway there in Georgia, Utah and Missouri. We are seeing progress all over America.

Please forward this story and get the word on congressional arrogance. Join the movement by signing our petition for term limits.

Nick Tomboulides is the Executive Director of U.S. Term Limits.