The effort is being spearheaded by the nonpartisan, nonprofit organization, U.S. Term Limits.

Kenn Quinn, Northern Regional Director with U.S. Term Limits commented on the resolution saying, “It is the Constitutional obligation of the state legislatures to control a runaway Congress. Federal lawmakers will not propose term limits on themselves. Therefore, we call on our state legislature to join with other states to call an Article V convention limited to proposing term limits on Congress.”

Article V of the Constitution of the United States specifies how amendments may be proposed; either two-thirds of both Houses of Congress or on the application of two-thirds of the state legislatures to force Congress to call a convention for proposing an amendment. 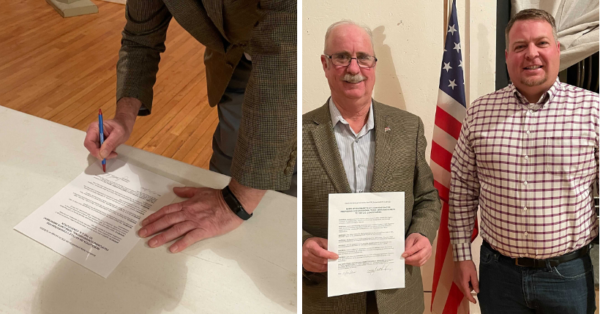 Chairman of the York County Republican Committee Jonathan Kinney (left) is joined by  Representative Nate Wadsworth who is the House lead sponsor of the Article V application for a Congressional Term Limits Amendment.