Baton Rouge, LA — Louisiana’s state representative Beau Beaullieu (district 48) was honored with a plaque for his support of term limits on Congress. U.S. Term Limits (USTL), the nation’s oldest and largest pro-term limits group, presented the distinction to Beaullieu at the Louisiana capitol earlier this week. 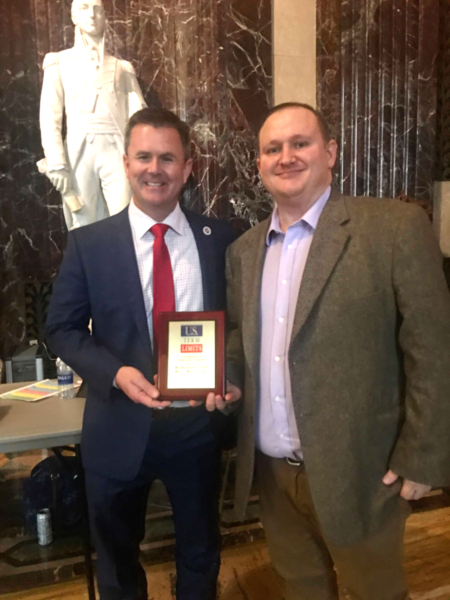 Les Chamblee of USTL gave the representative the “Champion of Term Limits” wood plaque which reads, “In recognition of a steadfast commitment to restore citizen government through term limits.” Beaullieu has pledged to support house concurrent resolution 51 (HCR51) which is slated to go to a vote on the house floor next week. The convention bill does not set the specific length of term limits, rather, it simply starts a discussion among the states on what the ideal term limits of Congressmembers should be.

Under Article V of the U.S. Constitution, the states have more power to amend the Constitution than the Congress does. In this situation, Congress would have a conflict of interest to propose term limits on itself. Recognizing this, the founders assured the states could both propose and ratify amendments without the approval of Congress. HCR51 leverages this power so the states may act in the best interest of the people.

Sponsored by Louisiana house representative, Mark Wright, the measure’s summary reads, “HCR51 calls for a convention to amend the United States Constitution to establish a limitation on terms for members of Congress.“

HCR51 must be approved by both the state house and senate in order for Louisiana to be counted in the states calling for a term limits convention.

Beaullieu is in good company in his commitment. More than 40 state representatives have pledged to approve HCR51. These representatives realize that an overwhelming majority of their constituents want term limits on Congress. According to a recent poll by McLaughlin & Associates, 85% of likely voters in Louisiana support term limits on Congress, including strong support across partly lines. 94% of Republicans, 80% of Democrats, and 83% of independents support the reform.

In addition, there are three members of Congress from the Louisiana legislature including Senator Cassidy, who have signed USTL’s term limits pledge.