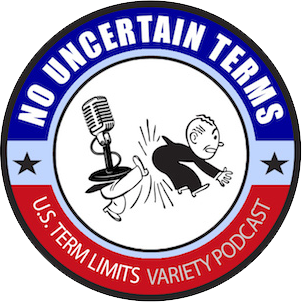 USTL executive director Nick Tomboulides gives the latest update on the Term Limits resolution moving towards legislation, and proposes sending busloads of psychiatrists to the state of North Dakota

The No Uncertain Terms podcast brings a refreshing and sometimes humorous view of the diabolical ways our supposed “representatives” go out of their way to suppress the will of the people in an effort to preserve their own power. No Uncertain Terms is the weekly podcast of U.S. Term Limits, a non-partisan, nonprofit organization with the primary goal of imposing term limits on all elected officials, particularly the U.S. Congress. Weekly 20-min podcast hosted by Philip Blumel and Nick Tomboulides of U.S. Term Limits.