Philip Blumel: Where is Izzy now? Hi, I’m Philip Blumel. Welcome to No Uncertain Terms, the official podcast of the Term Limits Movement for the week of May 17, 2021. 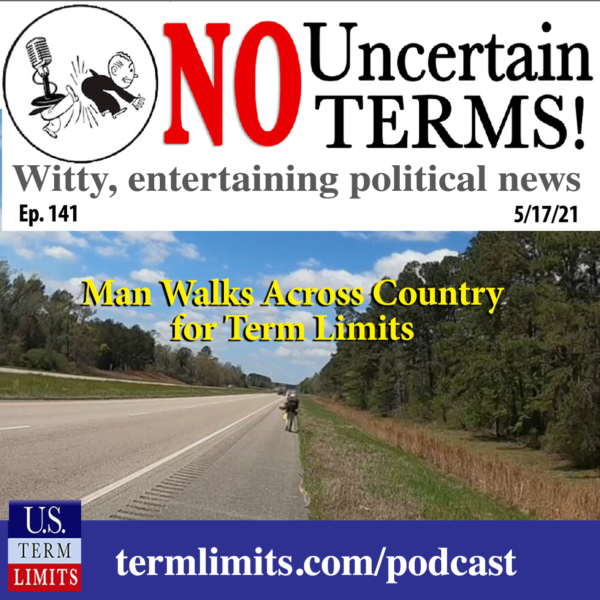 Philip Blumel: Tim “Izzy” Israel, his continuous trek across the USA to bring attention to the issue of congressional term limits. US Term Limits, Executive Director, Nick Tomboulides has the latest. Hey Nick.

Nick Tomboulides: Let’s rock and roll. How are you?

Philip Blumel: I’m doing fine, but I wanna ask you about Izzy. Where is he?

Philip Blumel: Yeah, I guess it’s slowing him down, but I guess it’s a good excuse. I know that Mike Sparks, the representative from Tennessee, that recognized him at the Capitol the other day. He tracked him down, I and he was actually walking with him for a while.

Nick Tomboulides: Yeah, is it not the real life Forrest Gump story, right?

Philip Blumel: Sure, it is.

Nick Tomboulides: He starts running by himself, and then you get some media coverage, you get some pick-up, people start to realize what’s going on. They also wanna be a part of it, ’cause it’s like, spawned this movement, and now people have started to join him. And it’s giving people hope. It’s amazing, and the synergy here is just… And the timing is perfect, because when Izzy set out, he started walking from Key West, he had no idea that there was this group that was going from state to state pursuing term limits on Congress through a convention. It’s just this amazing happenstance, and the timing is perfect because every time he promotes term limits, he happens to be in a state that is pushing for the Term Limits Convention. What could be more awesome than that?

Philip Blumel: [laughter] Yup. Mike Sparks also, after he tracked him down, recorded a YouTube video of hanging with Izzy at his KOA campground, in Smyrna, Tennessee, which is the district of Mike Sparks. So, I don’t know, you’re right. The synergies are fantastic and we’ll continue to follow Izzy’s trek across America. Good luck Izzy.

Nick Tomboulides: By the way, this past weekend, Izzy was actually presented with a Tennessee state flag.

Nick Tomboulides: By representative Sparks, that has been flown over the Capitol dome this week, and he was given that flag at the Capitol steps. So, it just adds to the legend of the story.

Philip Blumel: Right now, the Term Limits Convention bill has already passed one House of the Tennessee legislature, so the timing is really good. So, it’s the Senate, I believe, that’s considering the bill right now.

Nick Tomboulides: That’s right, yes. Still has to pass the Senate, thankfully, the session has ended, but that doesn’t mean the senators are not listening, and the passage in the House will carry over into the session next year.

Nick Tomboulides: So this is definitely the time to strike with something like this.

Speaker 4: This is a public service announcement.

Philip Blumel: Article V of the US Constitution provides for the ability of states to hold, “A convention for proposing amendments and includes rules for calling the convention and a ratification process for a proposed amendment that is recommended by the convention. The Article V convention is sometimes confused, and sometimes purposely, with a constitutional convention, such as the one that drafted the Constitution back in 1787, when there was no Article V. Michael Farris is an attorney and a co-founder of an organization called the Convention of States. Like US Term Limits, the Convention of States group is calling for an Article V convention to propose Amendments to the US Constitution, including among others congressional term limits. In this short 2017 clip, Farris draws the important distinction between an Article V Convention and a constitutional convention, which operates outside the Article V framework.

Mike Farris: So, the states must petition for the convention, and in that petitioning process, the states set the subject matter for the convention. At a constitutional convention, the subject matter is rewriting the government. At a convention of states, the subject matter is whatever it is that the state said we wanna talk about. In our particular case, it’s limiting the power of Washington DC through fiscal restraints, limiting the jurisdiction of the federal government and imposing term limits. And so the structure, the procedure, the nature of the amendments that are lawful. Under Article V, there are certain amendments that Article V says you can’t consider, taking away the equality of a state in the US Senate, for example, cannot be done through a convention of the states process. So, Article V conventions are controlled under the Constitution, a constitutional convention is an uncontrolled process through the residual sovereignty of the states. We wanna do a controlled Article V convention to take an out of control federal government and put it back under control.

Mike Farris: Washington DC isn’t the solution, it’s the problem. Liberty is being assaulted at every turn, while Congress buries us in debt. The founding fathers knew this might happen. Article V of the Constitution gives the states the power to stop a runaway federal government. A convention of states to amend the Constitution. It’s the only solution as big as the problem. It’s time to stand up, speak up and show up.

Philip Blumel: Thanks for joining us for another episode of No Uncertain Terms. The term limits convention bills are moving through the state legislatures, this could be a breakthrough year for the Term Limits movement. To check on the status of the term limits convention resolution in your state, go to termlimits.com/takeaction. There you will see if it has been introduced and where it stands in the committee process on its way to the floor vote. If there’s action to take, you’ll see a Take Action button by your state, click it. This will give you the opportunity to send a message to the most relevant legislators urging them to support the legislation, they have to know you’re watching, that’s termlimits.com/takeaction. If your state has already passed the term limits convention resolution or the bill has not been introduced in your state, you can still help. Please consider making a contribution to US Term Limits, it’s our aim to hit the reset button on the US Congress, and you can help. Go to termlimits.com/donate, termlimits.com/donate. Thanks, we’ll be back next week.