If you think members of Congress are serving longer and longer terms, your suspicions have been proved correct, as evidenced by the latest report entitled, “Congressional Careers: Service Tenure and Patterns of Member Service, 1789-2019” by William T. Egar of the Congressional Research Service (Updated January 3, 2019.) 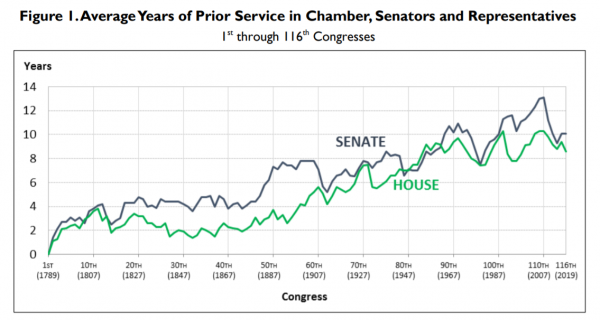 Long gone are the days of “citizen legislators” where turnover was frequent and resignations commonplace. “Politician” is now officially a professional career… as the average tenure of Representatives has had a nearly four-fold increase since the turn of the 20th century and the average tenure of Senators more than doubled (Figure 1).

Many lawmakers in the 18th and early 19th centuries might be characterized as ‘citizen legislators,’ holding full-time nonpolitical employment while serving in Congress on a part-time basis for a short number of years. During the 20th century, congressional careers lengthened as turnover decreased and Congress became more professionalized.

In addition, a sizable percentage of Senators (just shy of 50%) have had previous House experience (which is not calculated in the doubled tenure for Senators mentioned previously in this article –meaning their combined chamber average tenure is actually more). As you would expect, the Congress with the least amount of Congressional experience was the 1st Congress… all the Senators and Representatives had zero years of service prior to being sworn in. 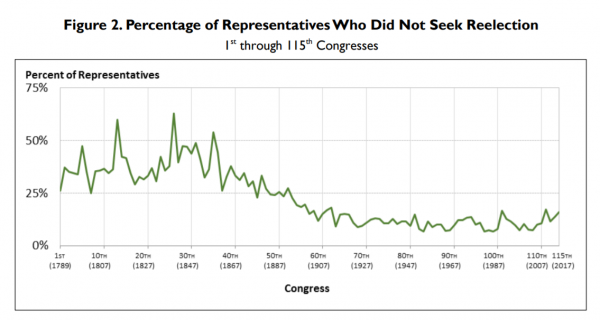 Referencing Figure 2, you can see that early on 50% or more representatives did not seek reelection and rarely did that figure drop below 25%. Since 1890, the number of incumbents NOT seeking reelection hovers steadily around 10%. 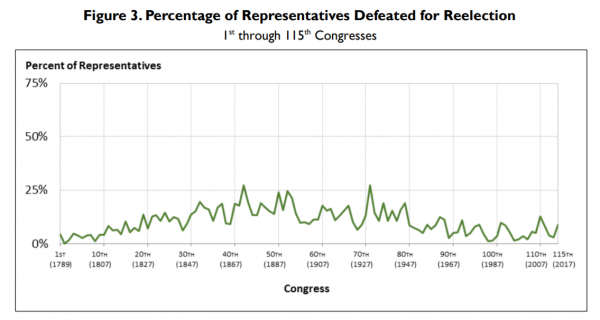 Another figure that doesn’t seem to drop below 25%, is the proportion of congressional incumbents that win reelection. As you can see in Figure 3, since the 1950s, reelection rates hover above 95% and sometimes close to 100%.

According to H. Douglas Price, the lack of incentives for members to retain their seats and less emphasis on seniority were the impetus for high turnover in the early days of Congress.

In addition, life in D.C. was not pleasant…these three factors are very different in 2019 where congressional perqs, elite seniority status, and the power and prestige of working on Capitol Hill (and improved transportation), as well as party pressure, all contribute to congressional longevity.

The rise of careerism in Washington may also be attributed to institutional changes in congressional elections such as gerrymandering and political party control including secret ballot primaries and other incumbent advantages. The Congressional Research report also cites increased federal power as a factor. With increased power comes inflated self-worth that compels one to remain in office.

According to the report, “from Congress’s early years and throughout the 19th century, it was not uncommon for 40% or more of the House to be made up of members with no prior experience in the chamber; in nine different Congresses during the century, Representatives with no previous House experience made up half of the chamber or more. As the proportion of incoming freshman members began to decline around the turn of the 20th century, the proportion of Representatives with more than 12 years of service began to increase.”

The Senate statistics generally mirror those of the House except fewer members have no prior chamber experience.

Since the beginning of the U.S. Congress, we have seen a substantial percentage increase in the number of years members serve. The average representative term has nearly quadrupled while the average Senate tenure has more than doubled. Roughly 24% of the current Congress has twelve years or more experience in at least one chamber and the trend is on the rise.

The factors attributed to increased tenure are expansion of incentives associated with the perqs, power and prestige of holding congressional office that lead to more incumbents seeking reelection and institutional changes such as increased incumbent advantage, gerrymandering, and political party influence that decrease chances of defeat at the ballot box to less than 5%.

The days of the “citizen legislator” in Congress are gone…for now.