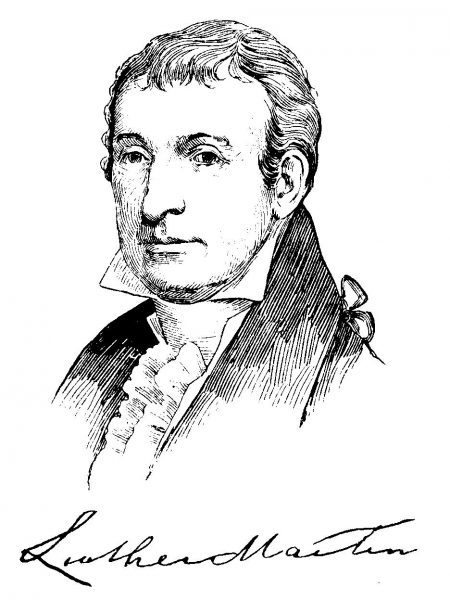 Martin was a representative of Maryland at the Constitutional Convention in 1787 and an example — exasperating to many — of the so-called anti-federalists who feared the new Constitution would centralize new and nearly unlimited national powers. To protect Americans’ liberties, the antis clamored for, among other things, a Bill of Rights and term limits. They got the former but not the latter.

In the debates over term limits, Virginian George Mason — often called the father of the Bill of Rights — pointed out that “nothing is so essential to the preservation of a republican government as a periodical rotation.”

Martin argued vociferously, as apparently it was the only way he knew how, that the entrenched politician “will take his family to the place where the government shall be fixed; that will become his home, and there is every reason to expect, that his future views and prospects will centre in the favors and emoluments of the general government.”
It is in lines like these that Luther earned the title ‘prophet’ in the book’s title.

But not only the anti-federalists feared an entrenched incumbency. Federalist G. Livingston of New York imagined the elite life of political lifers thusly:
In this Eden they will reside with their families, distant from the observation of the people. In such a situation, men are apt to forget their dependence, lose their sympathy and contract selfish habits … The senators will associate only with men of their own class, and thus become strangers to the condition of the common people. They should not only return, and be obliged to live with the people, but return to their former rank of citizenship, both to revive their sense of dependence and to gain a knowledge of the country.

The anti-federalists are labeled by history as the losers in the Constitutional battle, but their many contributions to the Constitution — tributes to their obstinancy and adherence to principle — greatly improved that document and helped it preserve rather than threaten liberty.

Time has proven the antis correct on term limits. However, to be fair, it took quite a while for their dark predictions to materialize, as rotation in office was so much part of the revolutionary (small-R) republican creed that it wasn’t until the turn of the 20th century that the professional politician became the norm in the Congress and legislatures across the country.

Many of the delegates who supported rotation in office but felt that term limits were unnecessary never dreamed of Congress members holding their seats for decades. The antis did, and slept fitfully upon leaving Philadelphia.