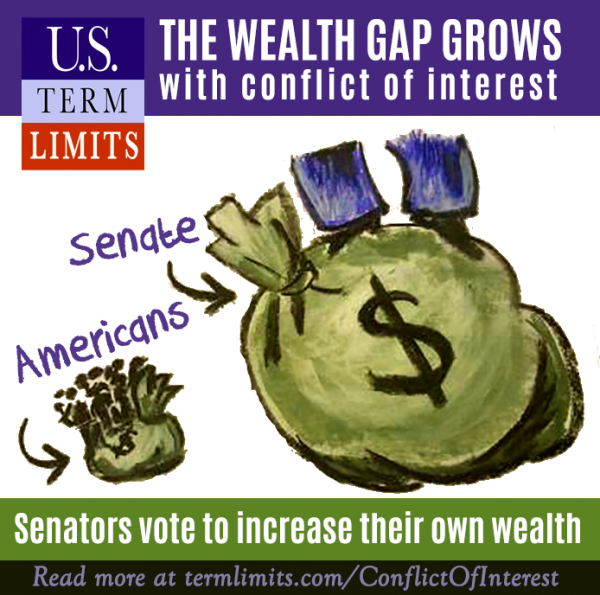 Ever wonder why senators seem to get wealthier and wealthier once they get into office?

Not only are they far more affluent than most of their constituents, they have the ability to legislate money into their own pockets through policymaking.

In a September 19th article in The Guardian, according to Sludge, an investigative news website focused on money in politics, “analysis of financial disclosure data shows 51 senators and their spouses have as much as $96 million invested in corporate stocks.”

U.S. lawmakers face glaring conflicts of interest setting policy for companies they are supposed to regulate.

Although not illegal, there is a perception of impropriety because it is impossible to be impartial on issues affecting your own personal wealth or the wealth of family members, especially when millions of dollars are at play.

Most of the stocks owned by the fifty-one senators are in five key sectors:

According to last week’s investigative report, ten members of the Senate banking committee own a total of as much as $8 million in stock in companies in the finance, securities, and real estate sector.

Other senators on the housing and urban affairs committee have millions vested in real estate.

US lawmakers are disproportionately wealthier than their constituents and growing wealthier. This inequity makes it impossible for members of the Senate to have any empathy in the average American experience.

It’s no wonder Americans overwhelmingly disapprove of Congress and don’t believe their representatives share their priorities.

At U.S. Term Limits, we believe the best anti-corruption measure is to divest Congress members from controlling policy for their own purses by removing them from their posts regularly with term limits.