The resolutions are being guided through by U.S. Term Limits (USTL), the nation’s largest term limits advocacy organization. Both are now cleared for the last step, a full vote of each chamber of the Arizona legislature.

“It’s great to know that the Arizona legislators take seriously their obligation as a check and balance to the federal government when it comes to proposing a term limits amendment to the Constitution,” said Jim Olivi, Arizona State Director for U.S. Term Limits. “We know Congress won’t propose this important election reform, so the states must step up and take action.”

Thirty-five Arizona state lawmakers in the 2021 legislature have taken the term limits pledge (see listing below) promising to support an Article V convention for term limits on Congress. According to a 2020 poll by McLaughlin & Associates, congressional term limits is the most popular and bipartisan issue in Arizona, with 85 percent support statewide. That includes 87 percent of Republicans, 85 percent of independents and 83 percent of Democratic voters.

Once both chambers pass the concurrent resolution, Arizona will be in the forefront of states that have applied to call a national convention for the sole purpose of proposing a term limits on Congress amendment. 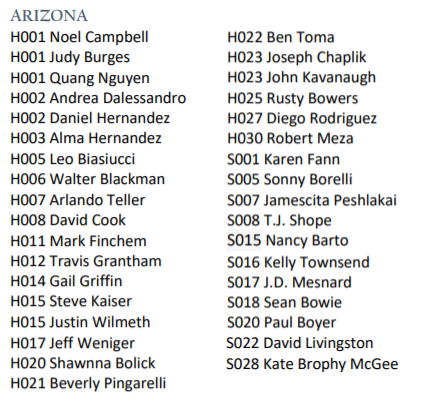