Ballotpedia has released its tenth annual state legislative competitiveness report for 2020. This report analyzes all 5875 state legislative elections that will take place this November. We’ll get into some of the details, but the big takeaway is pandemics are a boon for incumbents. Ballotpedia uses three factors to analyze the competitiveness of elections, they look at how many incumbents filed for re-election, how many incumbents have contested primaries, and how many seats are contested in the general election. The bottom line is that in 2020, 85% of incumbents are seeking re-election, the highest number in a decade, 80% of those did not face any primary challenge, and in the general election, 35% will not face any major party competition either. This should not be a surprise. 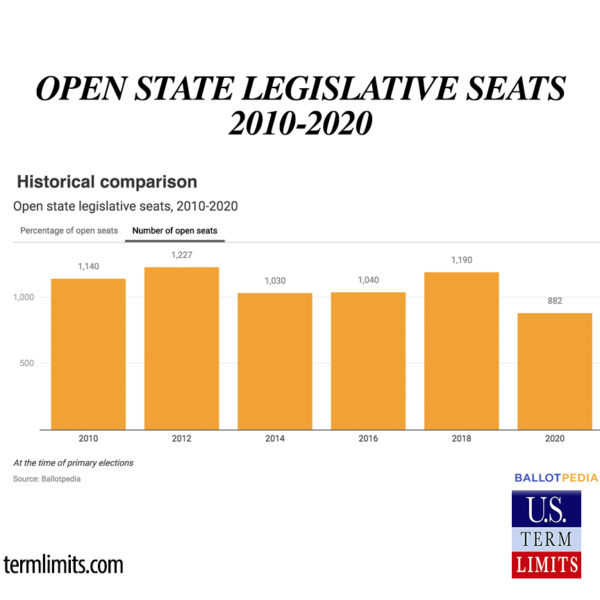 During an economic lockdown, it is particularly hard for challengers to meet and persuade voters. In a year like this one, term limits are more important than ever. So how do term limits affect competitiveness? Clearly, state legislative races would be far less competitive, if 15 states didn’t have term limits. Think about it, term limits create open seat elections in every district, every six or eight years, depending on the length of the term limit. No other election reform generates more candidates and more meaningful races.

In fact, combining all the Ballotpedia metrics, three of the top five and six of the top 10 of the most competitive states are all term limit states. Reelection should not be automatic, scaring away all the realistic challengers. Elections are supposed to be the opportunity for voters to be heard, not just a rubber stamp for the current occupant of an office until he or she decides to retire or dies or is sent to prison.

For the voters to be heard, there have to be meaningful candidates and competitive elections. Term limits provide them.

Thank you to Ballotpedia for keeping score.