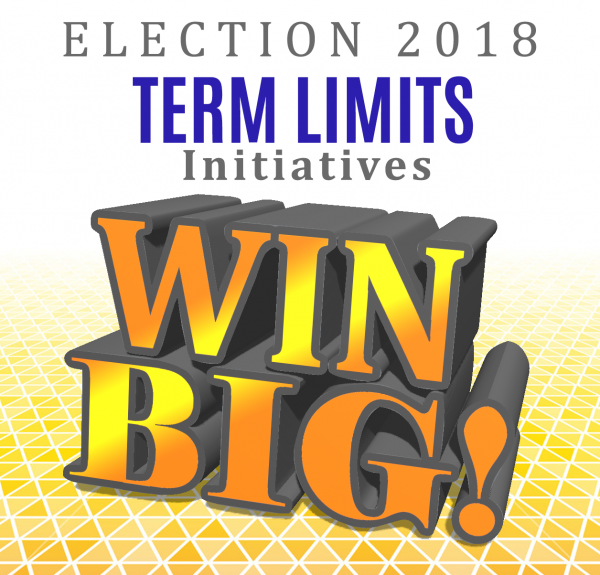 Term limits initiatives across the country win nearly every time by an overwhelming margin. From our research this year, nearly 40 ballot initiatives have won by large majorities but less than 10 have lost by close margins.

We’ve compiled a list of the term limits initiatives this year that include both implementing term limits and defending them when the ballot question seeks to increase or abolish existing limits. In most cases, where term limits win, they win by 70% or more. In the few initiatives where term limits have lost (see the Ohio referenda below), they do so by only a few percentage points equating to very few votes. This emphasizes the importance of getting out to vote on these important term limits referenda no matter what time of the year they appear on your ballot.

Camarillo City: Measure M to limit Camarillo city council members to a lifetime term limit of two four-year terms has been placed on the November ballot, thanks to a petition drive run by Camarillo Citizens for Term Limits (Facebook Page: bit.ly/2O19tFb). The group’s refrain: “Yes on Measure M, No on Measure E.” Measure E is a weaker, council-referred measure that would limit tenure to three consecutive four-year terms.

El Dorado County: Measure U, Board of Supervisors Term Limits Amendment to provide one additional four year term of office be added to extend allowed terms to three, such that Board members shall be limited to three consecutive terms

Folsom: Measure C, City Council Member Term Limit Amendment to impose term limits on the Folsom City Council. Currently, there is no limit on the number of terms a Council member may serve.

Long Beach: On August 7, the Long Beach City Council voted unanimously to refer a charter question to ballot to lengthen its maximum tenure from two terms to three terms. The Signal Tribune says that the amendment would “create” a three-term limit for mayor and city council, noting only much later in the story that a two-term limit for these positions already exists. The possibility of winning a third term by write-in votes under the current law enables proponents of this three-term limit to pretend that by getting rid of the write-in option, they are cleaning up and tightening the law. Of course, it would have been easy to eliminate the (rarely successful) write-in option and keep the two-term limit.

Newport-Mesa Unified School District, Measure H, Board Term Limits – limiting the terms of board members to three consecutive four-year terms after which former board members may serve again after a break in service.

Ojai: Measure K, Mayoral Elected Office Term Extension – a measure designed to extend to term of the elected office of the mayor.

Pinole: Measure P, the City Council’s plan to eliminate its own term limits (June 2018) was defeated by the voters.

San Diego: To their credit, the San Diego city council unanimously sent a measure to the November ballot to eliminate a term limits loophole whereby members can serve longer than the two-term maximum if redistricting happens to alter which district they’re serving in (or if they simply move from one district to another).

Measure K: would eliminate a controversial term limits loophole that allows some City Council members to serve longer than the voter-approved, two-term maximum if the district where they live changes.
Yes 87.4%
No 12.6%
Term Limits Win!

Santa Monica: Measure TL  would limit Santa Monica council members to three four-year terms “whether consecutive or not.” The council had “grudgingly” placed the question on the ballot, a formality they had little choice but to follow through on after citizens gathered enough valid petition signatures.

Southwest Community College District: Measure CC, Term Limits for Governing Board Members-limits members of the Governing Board from serving more than three terms in office. The limitation will apply only to terms that begin on or after December 1, 2018. Current and past members of the Governing Board may serve an additional three terms. The three term limit is a life-time limitation. Once a member has served three terms, they may never again be elected to the office, even if there is a gap between terms. Any member who serves more than one-half of a term will be deemed to have served a full term.

Aventura: By 70% to 30%, on August 28, Aventura voters passed a referendum to drop the city charter’s rule prohibiting termed-out city commissioners from running for mayor. Mayors and commissioners will now each be subjected to two consecutive four-year terms.

Yes 56.03%
No 43.97%
Term Limits Win!
Palm Beach Gardens: By 66% to 34% , on August 28 Palm Beach Gardens voters rejected Referendum Question 1 to weaken council term limits by stretching them from two consecutive terms to three consecutive terms. Voters rejected the measure despite the city council’s misleading taxpayer-funded propaganda. The propaganda included yard signs saying “Vote Yes: Keep Term Limits,” falsely implying that a No vote meant not keeping term limits. During the campaign, term limits activist Sid Dinerstein sued the city for “false and deceptive advertising.” (See the U.S. Term Limits editorial at bit.ly/2NG75n8.) Now that the election is over, he has amended the suit to focus on the impropriety of the city’s spending..
Yes 34%
No 66%
Term Limits Win!

McHenry County: A county-referred measure on the November ballot would limit the county board chairman to a maximum of two four-year terms and would limit county board members to three four-year terms. Board Chairman Jack Franks says, “It is my hope that our actions here [for term limits and other reforms] will spread to other counties, and force our state lawmakers to follow our lead.”

McLean County: Non-binding Resolution on Ballot: “Should holders of elected offices in Illinois be subject to term limits?”

Jackson County: Jackson County’s ballot included term limits for several offices. However, we have chosen not to include them in our report because the questions were not exclusive to term limits. The referenda had more to do with authority, line item vetoes, and salary increases.We would like to report to you, however, that voters approved of term limits of three four-year terms on the offices of sheriff and county prosecutor.

Lincoln: The citizens of Lincoln approved a charter amendment that limits the Lincoln mayor to three consecutive terms. The measure would apply retroactively, ending the three-term tenure of Lincoln’s current mayor, Chris Beutler. In late August, the city council did place the question on the ballot as required, with a title stressing the fate of the incumbent if the measure passes: “Mayoral term limits charter amendment that will disqualify the incumbent mayor from serving another term and prevent future mayors from serving more than three consecutive terms.”

Brookhaven: The town board of Brookhaven has referred a measure that combines two term-related changes. If voters approve, the individual terms of board members will be increased from two years to four years, and a maximum tenure of three four-year terms will be imposed on board members. Term limits will not be retroactive for current officials.

New York City: Prop. 3 – Among other reforms for the November ballot, New York City’s Charter Review Commission has proposed consecutive term limits of four two-year terms (eight years) for members of community boards. Four out of five borough presidents object to the ballot proposal. The exception is the borough president of Brooklyn, Eric Adams, who submitted written testimony to the CRC in support of community board term limits.

Seven Hills: The city council of Seven Hills has referred a measure to the November ballot to prevent “seat jumping” from an at-large council seat to a ward council seat and vice versa as a way to escape the town’s consecutive term limits. “You will be allowed to serve four consecutive [two-year] terms, whether you’re an at-large councilperson or ward councilperson,” explains Council President Anthony Biasiotta.

Youngstown: The Youngstown city council has referred a measure to the November ballot to repeal the term limits on itself. City voters approved the charter amendment to eliminate term limits for council members and for council president.

Arlington: Proposition No. 1 imposing a limit of three terms or six years in all for mayor and city council members.