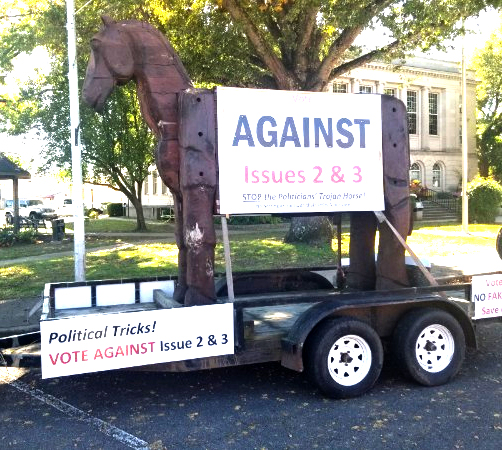 Today, the “Vote AGAINST Issue 2 and Issue 3” campaign will bring a rather large Trojan Horse to Heber Springs. The 10-foot tall carved wooden creature illustrates that Issue 2 and Issue 3 are sneaky, dirty tricks by politicians in the legislature meant to make fools of Arkansas voters.

The Trojan Horse will arrive at the County Courthouse in Heber Springs at 301 W Main Street at 3:30 pm today, along with a spokesperson for the campaign, which is led by Arkansas Term Limits and Protect AR Voices.

For more information about the “Vote AGAINST Issue 2 and Issue 3” campaign or to arrange an interview, please call David Lindsay at (501) 681-9091.