Want to know how your representative ranks on Term Limits legislation? Look up your lawmaker and contact him or her to let them know you care about term limits.

This new book The Term Limit Revolution is now available. It details all the reasons we need term limits, but more importantly it gives a comprehensive plan for imposing them.

No Uncertain Terms Podcast Episode 102: Believe It, or Not…!

00:04 Philip Blumel: Believe it or not. Hi, I’m Philip Blumel. Welcome to No Uncertain Terms, the official podcast of the Term Limits Movement, for the week of August 10th, 2020. 00:14 Stacey Selleck: Your sanctuary from partisan politics. 00:17 Philip Blumel: The attraction of power drives careers, politicians, to absurd lengths. Today, we’ll share 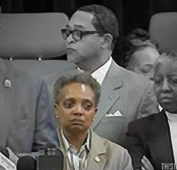 Chicago, the nation’s fabled “second city” — though, now the third largest incorporated metropolis in these United States — sports a new mayor. Last year, Lori Lightfoot won the city’s mayoral runoff by a whopping 47 points, tallying 73 percent of the vote. As reported, she is a mayor of many firsts. While Chicago has previously elected 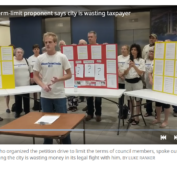 I lead America’s largest pro-term limits group. We’ve been involved in more than 500 different term limits ballot drives throughout America. Term limits efforts, by and large, all play out in the same way: Some tireless group of citizens, fed up with corruption and self-dealing, creates a referendum to enact term limits. People in the 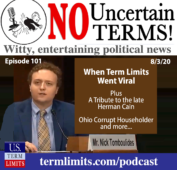 Philip Blumel: Term limits go viral. Hi, I’m Philip Blumel. Welcome to No Uncertain Terms, the official podcast of the term limits movement for the week of August 3rd, 2020. Stacey Selleck: Your sanctuary from partisan politics. Philip Blumel: In June, 2019, US Term Limits was asked to provide testimony before a subcommittee of the 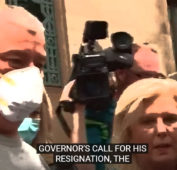 The Limits of Corruption 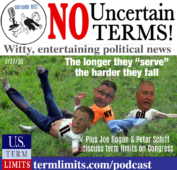 00:06 Philip Blumel: Is the longest serving house speaker in US history also the nation’s most corrupt? It could be. Although there’s a lot of competition. Hi, I’m Philip Blumel. Welcome to episode number 100 of No Uncertain Terms, official podcast of the term limits movement for the week of July 27, 2020. 00:25 STACEY 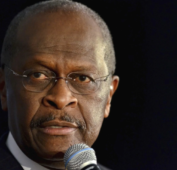 Nick Tomboulides: I’m sure our listeners probably remember Herman Cain. He ran for President in 2012. Herman re-enacted a famous moment from a presidential debate when he was asked whether it’s important for someone to have a lot of experience in government, a lot of experience in Congress. He said, “Well, we’ve got a Congress