Paul Jacob is a Board Member of U. S. Term Limits, and President of the Liberty Initiative Fund.

Why did term limits spring up in the 1990s? Term limitation has a long history in America, of course, and all the way back to Aristotle. But why the resurgence? I remember opponents to term limits suggesting that Americans were frustrated with slow economic growth. Not likely. In restoring faith in Congress, a 1993 article in the Yale Law and Policy Review, Authors Kimberly Corson, Thomas Mann, Norman Orienstan, and Todd Quinn recognized that the 1990s are different because the climate for far-reaching political reform is ripe, but why? 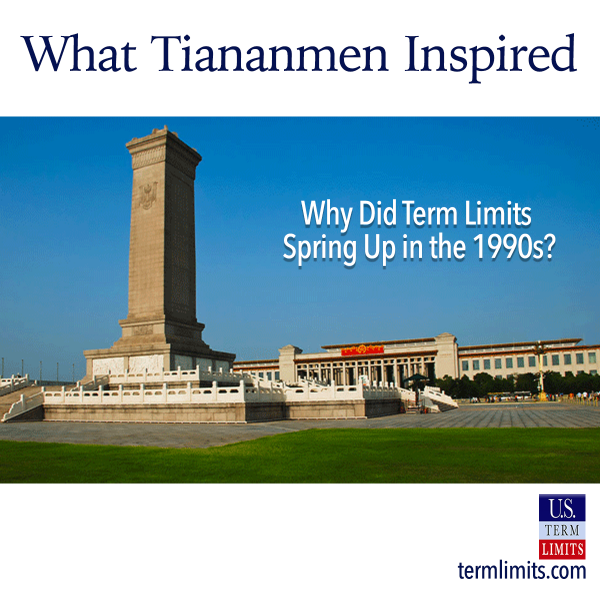 For seven weeks in 1989, Chinese students protested for freedom and greater democracy, joined by others until more than a million people filled Tiananmen Square. Americans were deeply moved by their makeshift goddess of democracy, resembling our Statue of Liberty, as well as by the students’ demands, which read much like our Declaration of Independence. Then, all that hope was doused, courtesy of the butchers of Beijing. Five months later, the Berlin Wall came down, followed by the overthrow of Communism throughout Europe. Then the fall of the Soviet Union in 1991, no more Cold War. Americans, liking an external enemy for the first time in decades, and with Tiananmen’s Tank Man fresh in our minds, could at last safely, take a good look at our own government. We did not like what we saw.

In 1990, Americans in three states, California, Colorado, and Oklahoma, used direct democracy by petitioning term limit initiatives onto the ballot. All three won. In 1992, U. S. Term Limits rallied voters to pass initiatives in a record 14 states. Sadly, the 1989 Tiananmen Square Protest did not usher in freedom for China, yet they lit fires in hearts all across the globe, including mine.

Printed with permission originally published on This is Common Sense.