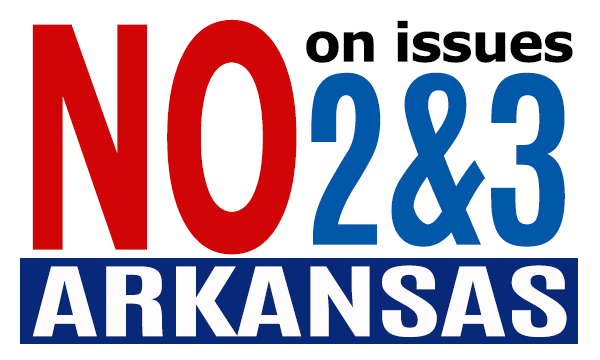 Download printable flyer on why we need to vote NO on Issue 2 and Issue 3 in Arkansas. Share this with everyone you know!

The Term Limit Amendment proposal on the 2020 ballot is a fraud perpetrated on the citizens of Arkansas by the politicians in the Arkansas Legislature. Issue 2 will eliminate lifetime term limits for Arkansas legislators, allowing them to “serve” until they die with occasional short breaks. The politicians in the legislature co-opted our amendment name in an effort to rollback legislative term limits in order to trick voters into thinking it was the citizens’ initiative.

Issue 2, should be referred to as “The Lifetime Politician Amendment.” It eliminates lifetime limits for legislators allowing them to serve for life with occasional sit out periods. It requires future legislators to take a four (4) year sit out after serving 12 consecutive years. This could be 14 years for those with 10 years of service who win a 4-year Senate term. However, this sit out period could be reduced to two years by simply taking it after 10 years, which resets the clock. Legislators could serve 10 years followed by a 2-year break, then run again for another 10 or 12 years. For example, a legislator could serve 22 out of 24 years by serving 10, sitting 2, and serving 12.  22 out of 24 years is the legislator’s idea of good term limits.

Current legislators, and those elected this year, get to max out the current limits, which are 16 years for Representatives and up to 22 for Senators, before the new limits apply to them. Meaning, for example, some Senators could serve 22, sit 4, then serve another 12. That’s 34 of 38 years. In the eyes of Arkansas state legislators, this is considered limits.

Issue 3 is a threat to the constitutional rights of Arkansans. It is entitled “Initiative Process and Legislative Referral Requirements Amendment.” A better name for it is “The Petition Killer Amendment” and it’s a direct attack by politicians and special interest groups on the constitutional rights of Arkansans. It threatens your right to petition and will kill citizens’ ballot access.

For roughly 100 years, our state constitution has guaranteed Arkansans the right to circulate and sign petitions to get the issues we, as ordinary Arkansans, care about on the ballot through Initiative & Referendum. This serves a vital purpose in our state and was put in place because a past generation of Arkansans realized that our state government wasn’t working for all Arkansans but rather only for the people running our government and those who could buy it. If Issue 3 passes, only special interest groups with a great deal of money will be able to decide what we can and can’t vote on.

Issue 3, if passed will shorten the time allowed to gather signatures. It will dramatically increase the number of counties from which signatures will have to be gathered. It will eliminate the 30-day period our constitution allows to gather more valid signatures. VOTE NO ON ISSUE 3.