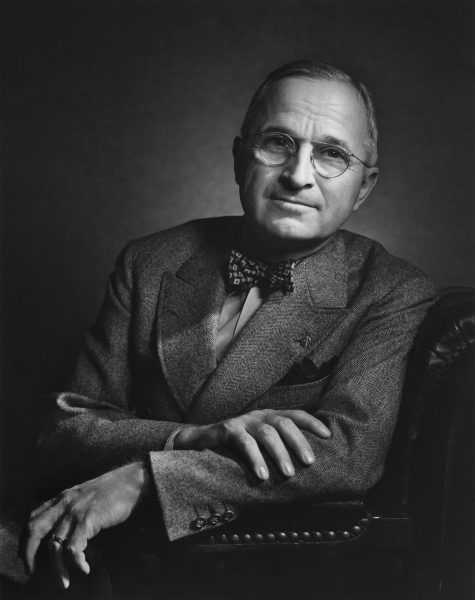 By Staff
America’s 33rd President, Harry S. Truman, oversaw the end to the largest intercontinental war in world history and the enshrinement of one of the most vital American traditions, the 22nd Amendment, which officially established term limits for the office of President of the United States.

This past Friday, October 5th 1947, is remembered as the day President Truman gave the first presidential address on television. It might not seem very illustrious or powerful at first glance to today’s reader, but TV’s wouldn’t be a common household product until the late 50’s and was seen at the time as groundbreaking technology, lest I mention Truman’s use of the atomic bomb. Only in public could one watch a movie, and for the vast majority of history, the people have always had to travel at their own expense to see the politicians that ruled over them.

Nowadays demand for virtual reality headsets, simulators and more are steadily increasing but it’s not quite yet a common way to get the news, let alone a speech from the President. With technology advancing at an exponential rate it isn’t unreasonable to believe that within the next two decades all elected officials jobs will require at least some use of virtual reality. Imagine being sick and having an actual doctor appear and assist you in your own home at the click of a button, likewise scheduling holographic ‘in person’ meetings will be the next major advancement in communication. Virtual town halls are current examples of this already taking place, where elected officials use software apps, such as Skype, to video chat with voters back home when they’re unable to appear in the flesh.

When Franklin D. Roosevelt ran for his incredibly controversial fourth term in 1944, he and his allies chose Harry Truman to join him as his vice presidential running mate. A World War l combat veteran, former Jackson County Judge and U.S. Senator from Missouri, Harry Truman and his allies were a key component to their decisive victory. But only months after winning reelection, Roosevelt died of a cerebral hemorrhage.

Traditionally, all former U.S. Presidents had voluntarily followed in the footsteps of President George Washington and declined to run for reelection if they had already won a second term. This gesture made by Washington didn’t just radically transform our society, but it defined it. By willingly and peacefully transferring power to another leader who was rightfully elected by the people, Washington set the standard abroad for excellency in leadership. His legacy of rotation has made a profound impact worldwide considering that over three-fourths of all countries executive leaders, such as President or Prime Minister, are legally bound by term limits.

Roosevelt’s unprecedented power grab in 1940 shocked the shambled remains of the free world when he ran for a third term but with his abrupt passing in 1945 just months after pushing the limits even further by winning reelection to a fourth term, the dreadful reality of a Democrat like Truman in the White House for potentially another decade began to sink in for grumbling Republicans in the minority and a war-weary American public. This move had never been made by any previous U.S. President.

If any other President was to continue Roosevelt’s legacy of an unending tenure, it would have been his successor Truman.

Republicans retaliated big and created a wave in the 1947 midterm elections by rigorously campaigning on the issue of term limits and retook both the House and Senate for the first time in over a decade. With the Democrat trifecta shattered, congressional Republicans sat poised to enact while Truman waited for the inevitable.

The issue of term limits was promptly addressed at the start of the 80th Congress and passed swiftly within that year with support from both sides of the aisle. Though ratification took nearly four years, on February 27th 1951, the process was officially completed and President Truman became one of what is now thirteen presidents that have witnessed a constitutional amendment passed while in office.

He is likely the last President to wrestle with the issue of term limits for the executive branch even though it did include a grandfathering clause, which states that the incumbent President was not directly effected by its passage.

Instead of taking the high road and returning home as a hero, Truman chose self-interest over service by running for reelection in 1952. He lost by over ten percent of the vote in the 1952 New Hampshire Democratic Presidential primary to the rising star reformer and U.S. Senator Estes Kefauver of Tennessee. Upon the humiliating loss, Truman bowed out of the race altogether and subsequently ended his career as an elected official. Kefauver would go on to lose the Democratic nomination at the DNC convention in Chicago to Illinois Governor Adlai Stevenson ll (he was heavily backed by Truman) who was ultimately defeated in the general election by a landslide to Republican General Dwight D. Eisenhower.

Members of the 80th Congress that had spearheaded the issue truly made a lasting legacy of freedom, and with their cake in hand, conveniently never made any serious attempt to establish term limits for their own office. To this very day, the incumbent members of our legislative branch live care-free of their constituents concerns and their tenure in office regularly surpasses that of Supreme Court Justices, who are appointed for life or until resignation.

Truman may have been the first President to address the world from a TV screen, but before we witness a future President address us as a hologram in our living room, let’s be sure to establish term limits for all members of Congress. Ask a candidate running to represent you to sign our pledge for term limits today at www.TermLimits.com/pledge.

Section 2. “This Article shall be inoperative unless it shall have been ratified as an amendment to the Constitution by the legislatures of three-fourths of the several states within seven years from the date of its submission to the states by the Congress.”