PHOENIX, AZ — Yesterday, the Arizona Senate Government Committee passed SCR 2015 for an amendment convention that would help put term limits on Congress. The resolution is sponsored by Sen. Kelly Townsend and supported by senators Borrelli, Mesnard, Petersen, and Ugenti-Rita. Among the “No” votes were senators Mendez, Peshlakai, and Quezada.

Senator Jamescita Peshlakai reneged on a pledge she had made to her constituents, by voting against the measure she had vowed to support. Despite her “no” vote, the resolution passed the senate committee with a vote of 4-3.

Peshlakai had previously signed a pledge stating “I, Jamescita Peshlakai, pledge that as a member of the state legislature I will cosponsor and vote for the resolution applying for an Article V convention for the sole purpose of enacting term limits on Congress.” View Peshlakai’s signed pledge.

Thirty-five Arizona state lawmakers in the 2021 legislature have taken the term limits pledge (see listing below).

According to a 2020 poll by McLaughlin & Associates, congressional term limits is the most popular and bipartisan issue in Arizona, with 85 percent support statewide. That includes backing from 87 percent of Republicans, 85 percent of independents and 83 percent of Democratic voters. That means Peshlakai’s anti-term limit position is at odds with members of her own Democratic party, who overwhelmingly support term limits.

“The people of Arizona are sick of dishonest politicians who say one thing while running for office and then do a 180 once they get power,” said Ron Hooper, Arizona Regional Director of U.S. Term Limits. “This state wants term limits. It is disappointing that Senator Peshlakai has decided to thumb her nose at the people and break her word.”

SCR 1025 and its State House counterpart, HCR 2015, are resolutions which allow the Arizona State Legislature to help call a convention to term limit Congress. It is sponsored in the state senate by Sen. Kelly Townsend and in the state house by Rep. Ben Toma. The house resolution, HCR2015, is scheduled to be heard on Wednesday, 2/17 in the house Government and Elections committee.

Once both chambers succeed in passing the concurrent resolution, Arizona will be in the forefront of states that passed a resolution to call a national convention for the sole purpose of proposing a term limits on Congress amendment. 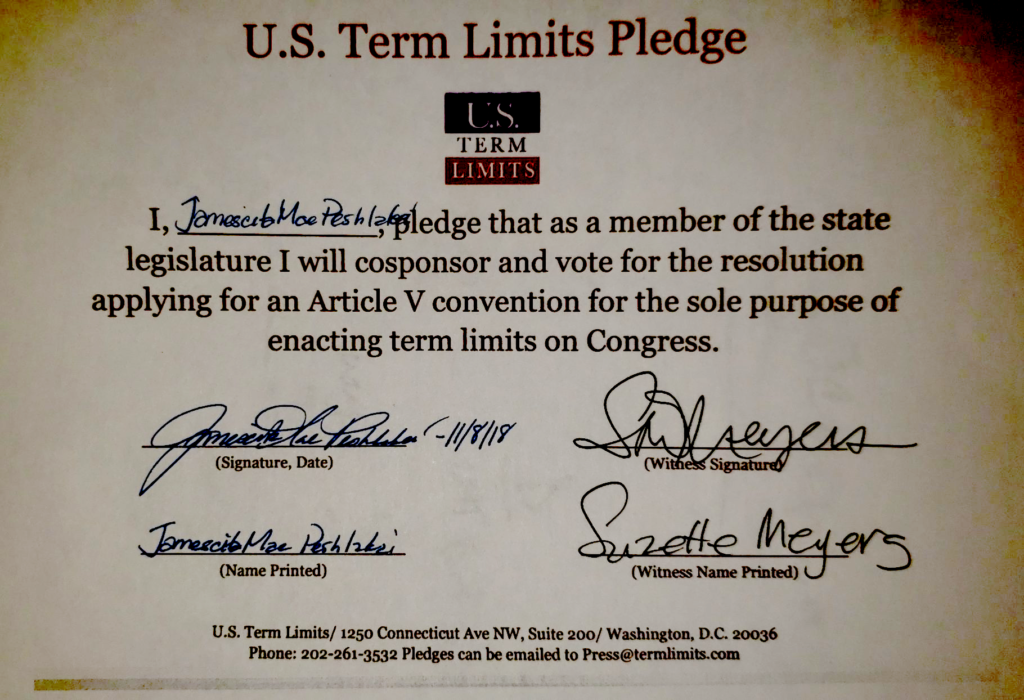