NEW YORK, NY — According to a new poll, term limits remain a key issue for New York City voters ahead of the upcoming mayoral election. The citywide poll, which was conducted between December 18-22 by RMG Research, found that 77 percent of voters say it is important that the next mayor of New York City protect and defend the city’s eight-year term limits law. Additionally, by a margin of 73 percent to 9 percent, voters say they are more likely to support a candidate for mayor who promises to protect the current eight-year term limit.

RMG Research is owned and operated by Scott Rasmussen. 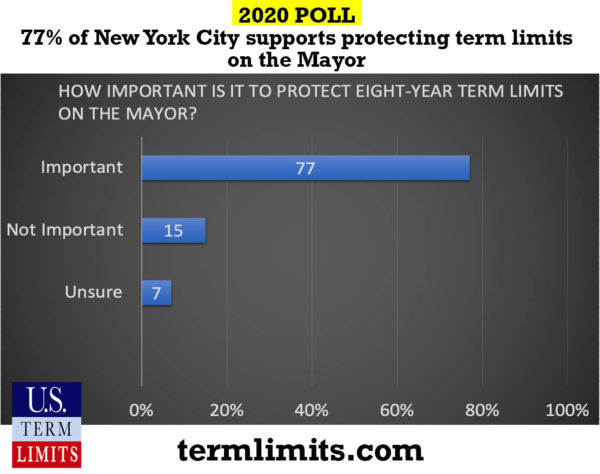 In 2008, the City Council—on the advice of then-Mayor Michael Bloomberg and influencers such as future President Donald Trump—weakened term limits from 8 years to 12 years, allowing Mr. Bloomberg to seek a third term. The measure proved contentious and city voters restored the eight-year limit by a landslide margin in 2010.

“The move to 12-year limits was a disgraceful and self-serving power grab,” said Howard Rich, Chairman of U.S. Term Limits and a city resident. “People haven’t forgotten. It is clearly important to the public that the next mayor be a stalwart defender of eight-year term limits.”

New Yorkers have a long history of backing term limits referenda. In a 1993 initiative led by philanthropist Ronald Lauder, voters established eight-year term limits in an 18-point landslide. Then, in 1996, voters rejected a measure which would have lengthened the limit to 12 years. In 2010, voters restored the eight-year limit the Bloomberg Council had repealed. And in 2018, voters resoundingly adopted an eight-year limit for members of community boards.

“We see across the board that, when real term limits are not in place, corruption and self-dealing run rampant. Just look at Congress as an example,” Rich added. “Time for these mayoral candidates to step up and commit to protect term limits.”

The survey of 500 registered voters in New York City was conducted online by RMG Research, Inc. from December 18th-22nd using a representative sample to reflect the city’s population of registered voters. It has a margin of error of +/- 4.5 percentage points.