Nashville, TN — Tennessee’s state representative Rush Bricken (district 47) was honored with a plaque for his support of term limits on Congress. U.S. Term Limits (USTL), the nation’s oldest and largest pro-term limits group, presented the distinction to Bricken at the Tennessee capitol earlier this week.

Aaron Dukette of USTL gave the representative the “Champion of Term Limits” wood plaque which reads, “In recognition of a steadfast commitment to restore citizen government through term limits.” Bricken has pledged to support house joint resolution 8 (HJR8) which successfully passed through the lower chamber earlier this month. The convention bill does not set the specific length of term limits, rather, it simply starts a discussion among the states on what the ideal term limits of Congressmembers should be. 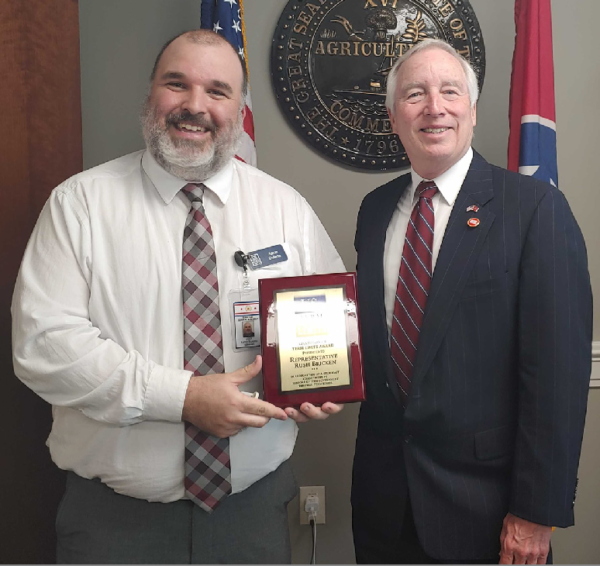 Bricken is in good company in his commitment. More than 53 state representatives voted to approve HJR8. These representatives realize that an overwhelming majority of their constituents want term limits on Congress. According to a 2020 poll of voters in the state conducted by RMG Research, term limits enjoy wide bipartisan support. In Tennessee 77% of Republicans, 90% of Democrats, and 71% of independents strongly approve of placing term limits on members of Congress.