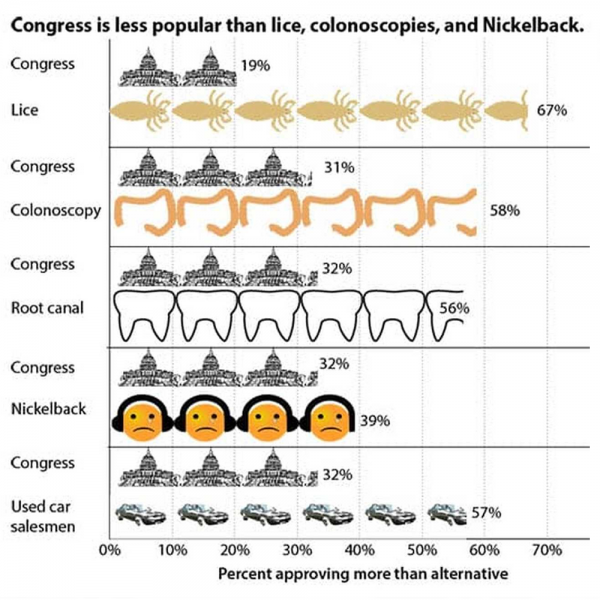 Sounds like a joke but it’s actually true. In a recent No Uncertain Terms podcast, U.S. Term Limits’s Executive Director Nick Tomboulides and U.S. Representative Beto O’Rourke of Texas referred to Americans’ ranking of Congress as somewhere in the vicinity of head lice and gonorrhea, respectively.

Congressional favorability ratings rise and fall over time and pollsters watch these political portents closely.  When we say rise and fall, we actually mean that the likability of Congress consistently hovers between a near rock bottom 9-20%… earning them a spot below America’s preference for head lice.

It turns out both Tomboulides and O’Rourke were referring to genuine research. In 2013, Public Policy Polling in North Carolina was inspired by a death spiral dip in Congressional popularity  – an all-time low of 9% — to ask: Do voters really think of members of Congress with the same disdain they have for traffic jams and colonoscopies?

It turns out they don’t. They prefer traffic jams and colonoscopies to Congress by a whopping 20 percentage points!

According to the PPP polling, Americans also have a higher opinion of root canals, Genghis Khan, used car salesmen, and Brussel sprouts. Even Nickelback, believe it or not, beats out the U.S. Congress.

But Americans are a discriminating lot. They are willing to see the virtue in the U.S. Congress when compared to Fidel Castro, lobbyists, meth labs, Ebola and the Kardashians.

You can find a link to the full poll results in our episode 16 program notes at www.termlimits.com/podcast.

Dissing Congress is a bipartisan sport. PPP reports that 82 percent of Democrats and 87 percent of Republicans express disfavor of Congress, which is a very similar level of support we see in both parties for term limits. Clearly, this is one issue that unites Americans regardless of political affiliation.

While humorous, this polling uses state-of-the-art polling methodology and begs a serious question: If Congress is so universally disrespected, why are well over 90% of incumbents running for their own seat reelected?

The answer is that the system is rigged in favor of incumbents for the purpose of protecting them against the public’s ire. The vast majority of Congressional elections across the country are nominal, lopsided affairs. The automatic special-interest financial support and other advantages that come with incumbency are simply overwhelming and dissuade serious, goal-oriented people from running for those offices.

Only in open seat elections does the contemporaneous thinking of voters squeak into an entrenched Congress. Even then, the newbies are far, far away from the levers of power in a seniority-based system. By the time they get a shot at a committee helm, it’s too late. They have become acculturated to the swamp. Washington DC changes them before they are able to change Washington DC. It’s no wonder voters see them in the same light as playground bullies, replacement NFL referees, and pop stars like Lindsay Lohan.