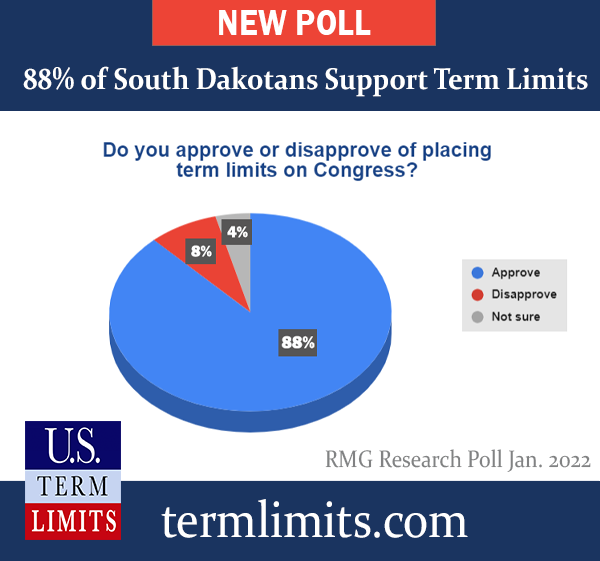 A recent poll of South Dakota voters shows broad consensus that it is time for term limits on Congress. The survey, conducted by RMG Research, Inc., found that a whopping 88 percent of the South Dakota voters polled support an amendment to the U.S. Constitution limiting the number of terms senators and house representatives may serve in the U.S. Congress.

The pollsters also found that support for congressional term limits is broad and intense across all political, geographic and demographic groups. The results indicate that 79% of those polled want their state representative and state senator to vote in favor of an amendment proposing convention to implement term limits on members of Congress.

Since state legislators in South Dakota are subjected to term limits, respondents were asked, “Is it fair or unfair that members of Congress can hold power for life, while state officeholders are term-limited?”  79 percent agreed that exempting Congress from term limits is unfair.

For South Dakotans, this survey is more than fodder for a discussion at the water cooler. It has practical importance this upcoming legislative session, as a resolution will be introduced calling for a congressional term limits convention.

U.S. Term Limits Regional Director Aaron Dukette said of the poll, “It has become painfully obvious that Congress is broken by career politicians who put themselves ahead of the people.” He concluded, “Now is the time to fix the problem. Congress will not term limit itself. This poll is proof that the majority of voters in South Dakota demand the state legislature act to impose term limits on federal lawmakers.”

South Dakota voters overwhelmingly support an amendment to the U.S. Constitution limiting the terms of all U.S. Senators and U.S. House Representatives. The intensity of this support is measured in their willingness to vote for state legislators who will vote ”yes” on term limits and against those who will vote “no” against term limits on members of Congress.

This survey of 500 likely general election voters in the Mount Rushmore State was conducted on January 18th through
20th, 2022 and has a margin of sampling error for the full sample of +/- 4.5 percentage points.