At a time when wildfires are burning out of control in the west, a worldwide COVID pandemic paralyzes our nation, and chaos and race riots dominate the daily news, a new poll indicates that political corruption is second on the list of the top issues concerning Americans today.

The online survey of 1,902 likely general election voters specifically asked respondents “Which THREE of the following are the most important issues facing the country?” followed by a list of fifteen options from which to choose. The poll has a margin of error of ±2.25% for the entire sample.

While respondents did not elaborate on their perception of “political 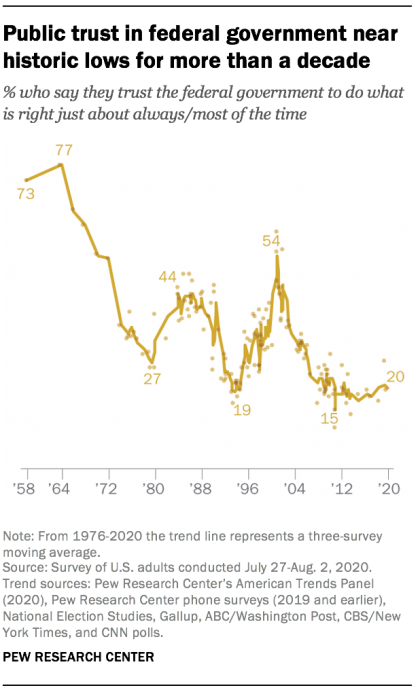 corruption,” it is clear that people are disgusted with the current politicians even more so than other headline grabbing issues.

In another recent survey released by Pew Research Center this week, “Just 20% of U.S. adults say they trust the government in Washington to “do the right thing” just about always or most of the time.” Trust in our federal government has taken a giant nose dive since 1977. The past twelve years has barely seen an approval rating higher than 20%.

With pathetic performance numbers such as these, why do incumbents keep getting reelected year after year after year? It certainly isn’t based on stellar performance. Apparently “voting the bums out” isn’t working.

Term limits would go a long way to restore the public trust in our government and root out political corruption before it takes an even more powerful stranglehold of the soul of our country.