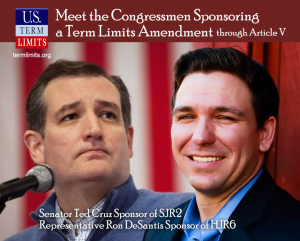 U.S. Term Limits (USTL), the leader in the national movement to limit terms for politicians, today called on Congress to pass the Cruz-DeSantis resolution for a congressional term limits amendment. The resolution matches President-Elect Trump’s proposed limits of three terms in the House and two terms in the Senate.

“President-Elect Trump, President Obama, Speaker Ryan and the American people have all said it’s time for term limits,” said USTL President Philip Blumel. “Congress should listen by passing this resolution and sending it to the states for approval.”

According to national polls, congressional term limits is the most popular and bipartisan political issue in the United States. A 2016 Rasmussen survey found that 74 percent of Americans favor the amendment, while just 13 percent are opposed. Overall, 77 percent of Republicans, 67 percent of Democrats and 79 percent of independents favor term limits.

The agreement between President-Elect Trump and President Obama underscores the bipartisan appeal of term limits. In his first post-election interview, Trump told 60 minutes “we’re going to put on term limits, which a lot of people aren’t happy about, but we’re putting on term limits.”

President Obama added his endorsement at a news conference the following day, remarking “I think we want to see new voices and new ideas emerge. That’s part of the reason why I think term limits are a really useful thing.”

The amendment has been introduced in the U.S. Senate by Senator Ted Cruz (SJR2) and in the House of Representatives by Representative Ron DeSantis (HJR6). Forty-six additional members of the House and Senate have already signed pledges committing exclusively to the Cruz-DeSantis resolution. It requires a two-thirds majority vote from both chambers to be sent back to the states, where approval from 38 states is required to ratify it into the Constitution.

“U.S. Term Limits will do all we can to help Senator Cruz and Congressman DeSantis move this resolution forward,” Blumel added. “Career politicians have let our country down and it is time for a new generation of leaders.”