Philip Blumel: Yet another one bites the dust. Hi, I’m Philip Blumel. Welcome to No Uncertain Terms, the official podcast for the Term Limits Movement for the week of September 26th, 2022.

Philip Blumel: How many more times am I going to recycle that same headline for an episode of No Uncertain Terms? Well, probably as long as anti-term limits politicians keep getting arrested for corruption, is that fair? Sometimes it seems like corrupt politicians will take any stance on any issue to line their pockets, except for one issue, they always seem to oppose term limits. On this, they show heart-felt conviction. In this episode of No Uncertain Terms, we offer the latest evidence, the August indictment of former Tennessee State House Speaker Glen Casada. Hit it. 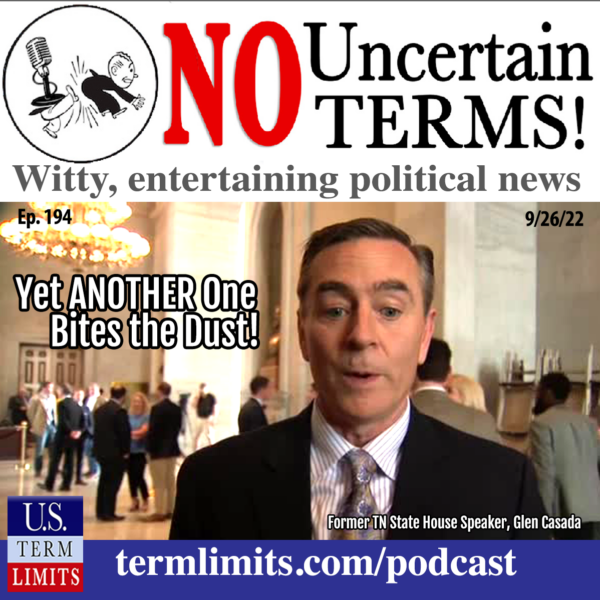 Philip Blumel: Former Tennessee State House Speaker Glen Casada has spent the last 20 years in the Tennessee legislature. After his arrest and indictment on 20 federal corruption charges in August, he now faces 20 years at least in prison, plus millions in fines. This career politician, an opponent of term limits, started his career as a Williamson County Commissioner in 1994, and was at first elected to the State House in 1991. Casada climbed the political ladder to become house speaker in 2019, a job he only held for eight months before his political boat started taking on water.

Philip Blumel: Casada lost his speakership after a texting scandal involving his aide and political sidekick, Cade Cothren, who admitted to drug use in state offices, and also soliciting sex from legislative interns and making other inappropriate sexual advances to female lobbyists and staff. Casada defended his friend Cothren, and in doing so, a series of racist texts were uncovered between Casada and Cothren. Casada announced that he would discuss stepping down after he returned from a scheduled European vacation, which would allow him conveniently to continue in the meantime to collect his speaker salary, which is about three times that of the rank and file house members. When he finally stepped down as speaker, he held onto his seat getting re-elected in 2020 as an incumbent. However, shortly thereafter, it was revealed that both Casada and Cothren were under investigation for far more serious charges. In August of this year, Casada and Cothren were arrested and charged with eight counts of money laundering, six counts of wire fraud and two counts of bribery and kickbacks. Casada and Cothren had a third partner, former representative Robin Smith, who is cooperating with authorities and allegedly created a political consulting firm called Phoenix Solutions. The trio hid their ownership of the company in order to get approved as a state vendor.

Philip Blumel: Get this, prosecutors say they created a fake person named Matthew Phoenix to serve as the face of the company, but this turned out to be a alias for Cothren. This company was used to funnel state money directly to the conspirators. Casada, by the way, is currently in office. He announced he does not intend to run again when his term ends at the end of this year. Appearing in handcuffs before a federal judge at the end of August, Casada and Cothren pleaded not guilty to all of these charges. The highest charge carries potential penalties of 20 years in prison and fines of $500,000. If convicted on all the charges, the pair could face 100 years in prison and fines up to $2.5 million. But wait, there’s more. As speaker, Casada refused to permit a vote on the Term Limits Convention Bill. This is the resolution applying for an amendment writing convention limited to the subject of Congressional Term Limits. Under Article V of the US Constitution, if two-thirds of the states apply for such a convention, it must be called to consider the issue and possibly submit an amendment proposal to the states. After Casada lost his position of leadership however, the resolution finally reached the floor for a vote in the spring of this year where it passed 53 to 34.

Philip Blumel: Casada voted no to the Term Limits Resolution. Casada was undone by his hubris, his arrogance, his dishonesty, and until the end, clung to his sole real conviction, that a politician once elected, is entitled to line his pockets until the end of time.

Philip Blumel: Now that the Supreme Court of North Dakota has shot down the Bismarck establishment’s attempt to keep legislative term limits off the November ballot, it’s becoming quite clear why politicians chose to fight term limits in the court instead of at the ballot box. As KX CBS News in North Dakota reports, citizens overwhelmingly support the new term limits measure.

Speaker 3: Continuing coverage on a poll conducted on behalf of supporters of term limits for state lawmakers and the governor, it suggests a large majority of those surveyed favor those limits. Josh Meny went out into the community to see if their opinions on the measure match up with the poll findings.

Speaker 4: I’m here in Bismarck in front of the North Dakota Department of Transportation on what could be one of the last warmer days before fall sets in, and I’m asking the public what their thoughts are on the term limit initiative on November’s ballot.

Speaker 5: It should even be less than that, maybe four.

Speaker 4: Mandan Resident Christopher Torres, is a Marine Corps veteran. He thinks capping state lawmakers and the governor to eight years is reasonable.

Speaker 5: But I think a lot of times they’re just sitting in in their position so long, they kinda get corrupt, get that money and changes them.

Speaker 4: Nicolas Huff, is a private contractor who writes software for the state, he says he loves living in North Dakota, but in his home state of Hawaii, a governor who has been elected to two consecutive terms must be out of office for at least one cycle before being eligible to run again.

Speaker 6: I think term limits would be pretty healthy for democracy in general. It’s really easy for an incumbent to just kind of keep winning because of name recognition and all that. Assuming you’re term-limited, it means that someone has to come up with probably new ideas every time or at least have the voters reaffirm that, “Okay yes, even with this new person, we do want the same policies again.”

Speaker 4: Bismarck resident Sarah Braun, says eight years is enough time for a state lawmaker and the governor to do their job.

Speaker 7: Since if you’re 70 years old, your hot topics in your mind aren’t the same as a 25-year-old’s, it could get a little stale in the office.

Speaker 4: And she’s leery of politicians who are concerned more about their approval rating than taking tough stances.

Speaker 7: I certainly do worry about corruption, popularity contest. It shouldn’t just be that you’re in that office because you have 100 friends in politics.

Speaker 8: Well, I think we need a little change. It don’t hurt to have some change once in a while.

Speaker 4: The executive summary on North Dakota term limits done by RMG Research Group, which you can find on kxnet.com, shows that 81% of likely North Dakota voters are in favor of capping term limits for lawmakers and the governor by eight years, and as you can see today, people feel quite the same. Reporting in Bismarck for KX News, I’m Josh Meny.

Philip Blumel: Thanks for joining us for another episode of No Uncertain Terms. The term limits convention bills are moving through the state legislatures, this could be a breakthrough year for the Term Limits Movement. To check on the status of the term limits convention resolution in your state, go to termlimits.com/takeaction, there you will see if it has been introduced and where it stands in the committee process on its way to the floor vote. If there’s action to take, you’ll see a Take Action button by your state, click it. This will give you the opportunity to send a message to the most relevant legislators urging them to support the legislation. They have to know you’re watching. That’s termlimits.com/takeaction. If your state has already passed the Term Limits Convention Resolution or the bill has not been introduced in your state, you can still help. Please consider making your contribution to US Term Limits. ’cause it’s our aim to hit the reset button on the US Congress and you can help. Go to termlimits.com/donate, termlimits.com/donate.

Philip Blumel: Thanks. We’ll be back next week.

Stacey Selleck: The revolution isn’t being televised. Fortunately, you have No Uncertain Terms podcast.