Philip Blumel: The Term Limits Resolution passes Missouri. But wait a minute. Didn’t we already pass Missouri? Hi, I’m Philip Blumel. Welcome to No Uncertain Terms, the official podcast of the Term Limits Movement for the week of May 30th, 2022. 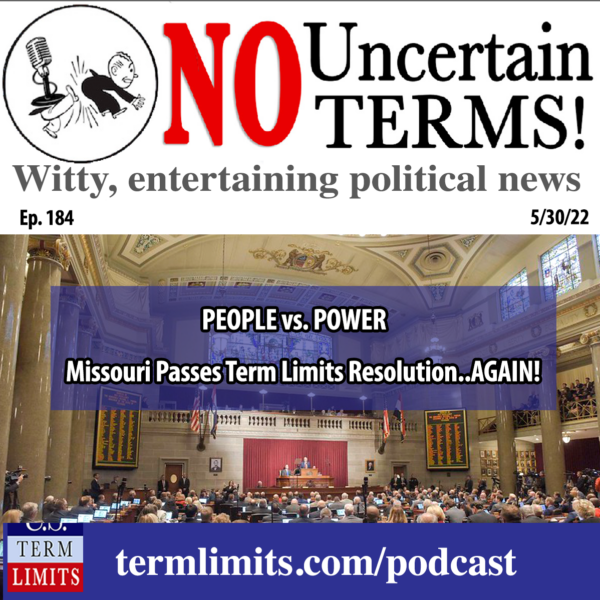 Philip Blumel: Following passage in the Senate recently, a the Missouri House on May 10th voted 82 to 66, to renew its previous application for an amendment writing convention of the States, limited to the subject of congressional term limits. Five States so far have passed an official application for a term limits convention after Wisconsin became the latest to do so earlier this year. Now, Missouri is one of these, and yet the effort to persuade the State to make this call had to be repeated in 2022. The reason is that when Missouri originally passed the resolution back in 2018, a term limit opponent attached an amendment to the bill that set an expiration date, so if the requisite 34 states had not called for a term limits convention by 2023, Missouri’s call would have expired. So the whole battle for Missouri had to be fought again. Fortunately, the citizens won again.

Philip Blumel: Now Missouri has term limits on its legislature and governor, so the people of the show-me State are very well acquainted with this reform, and they would like to see it imposed on the US Congress. The law was passed again on a bipartisan basis, although interestingly, opposition to the bill was also bipartisan [chuckle], and again, this shows that term limits is an issue that’s not about right versus left, it’s about people versus power. Fortunately, citizens got involved, and every voting member of the legislature heard their message loud and clear, both in the new polling that was done, and also from the calls and the emails that rained down on Jefferson City from all over the State prior to the vote. So the five State calls for the Term Limits Convention are now secure. None of the others had expiration dates.

Philip Blumel: So now keep in mind that if 34 States echo Missouri’s call, or I should say, if 29 more states do so, then the amendment writing convention between the State must be called according to Article 5 of the US Constitution. And any amendment proposed by the convention would go to the States for ratification by three quarters of the States. That would be 38. Well, that’s our goal. And real progress has been made in 2022 with Wisconsin’s call, and now Missouri’s recall, I guess you could call it. The year is not yet half over, and we’re not done yet.

Speaker 3: This is a public service announcement.

Philip Blumel: Ron DeSantis strikes again. You know No Uncertain Terms is a non-partisan podcast produced by a non-partisan organization, US Term Limits, on behalf of a non-partisan issue, Term Limits. So it might seem a little off-putting to some that we run so many clips of Florida Governor Ron DeSantis on our show. We get it, but what can we do? Governor DeSantis is always talking about Term Limits plus both as a US representative and now as governor, he has taken concrete steps to enact or defend existing term limits at the federal, state and now county level. So here we go again. DeSantis delivered his latest term limits message in mid-May in Okaloosa County as captured by Forbes Magazine on their YouTube channel.

Gov. Ron DeSantis: The Congress said they have printed money, obviously Biden was supporting of it, trillions and trillions of dollars. A lot of these Congress people have been there for 30 or 40 years, okay, and they’re really serving this country poorly. You know I think one of the best things we could do in our country is have term limits for members of Congress.

Gov. Ron DeSantis: You know we have term limits in the legislature in Florida, and what that means is here you end up, some of these guys like what we have… You we have speakers and leaders of the Senate and they’re there for two years as leader. So they have an incentive to try to get a lot of things done and leave a legacy. In Washington, all they wanna do is just keep themselves in office forever, and they end up making decisions that are constantly benefiting themselves at the expense of the country’s future and so if you did do… You know in Florida, we’ve actually certified an amendment for term limits, some other states have done it, and we need a lot more to do it, but if you actually did term limits, you know you would have had… Just imagine you know Nancy Pelosi would have been gone in the 1980s if you had term limits I mean so…

Gov. Ron DeSantis: So we… But bottom line is, is that we are fighting back, we’re doing what we need to do, and we’ll see what ends up happening, but it’s frustrating to see so many bad policies are being posed imposed on the American people.

Philip Blumel: Thanks for joining us for another episode of No Uncertain Terms. The Term Limits Convention Bills are moving through the State legislatures. This could be a breakthrough year for the Term Limits Movement. To check on the status of the Term Limits Convention Resolution in your State, go to termlimits.com/takeaction. There you will see if it has been introduced and where it stands in the committee process on its way to the floor vote. If there’s action to take, you’ll see a Take Action button by your State, click it. This will give you the opportunity to send a message to the most relevant legislators urging them to support the legislation, they have to know you’re watching, that’s termlimits.com/takeaction. If your State has already passed the Term Limits Convention Resolution or the bill has not been introduced in your State, you can still help. Please consider making a contribution to US Term Limits. It’s our aim to hit the reset button on the US Congress and you can help. Go to termlimits.com/donate. Termlimits.com/donate. Thanks, we’ll be back next week.

Stacey Selleck: The revolution isn’t being televised. Fortunately, you have the No Uncertain Terms podcast.