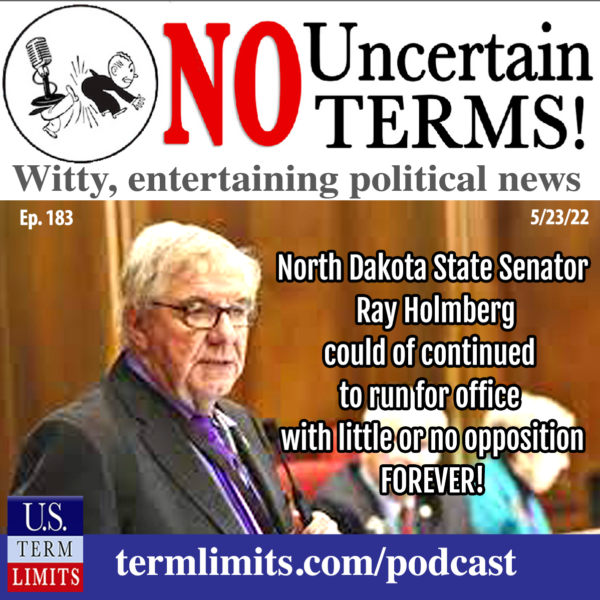 Philip Blumel: Politics attracts all kinds, but the corrupt and the deviant are attracted to this industry like no other. In this profiles in corruption segment, we turn to North Dakota’s longest serving state senator, Ray Holmberg. Holmberg resigned in April, after it was reported that he had exchanged texts with a jailed man facing child pornography and sexual abuse charges. The North Dakota newspaper, The Forum, reported that Holmberg exchanged 72 text messages in the summer of 2021 with a 34 year old, Nicholas James Morgan-Derosier, a landscaper who was in the Grand Forks county jail at the time, facing these federal child pornography charges.

Philip Blumel: State senator Holmberg most recently came to our attention for his public opposition to a citizens initiative that aims to impose eight year term limits on the North Dakota legislature. At a January 4th detention hearing in North Dakota’s federal court, Assistant Attorney General Jennifer Poole revealed that Morgan-Derosier texted a, “Seventy seven year old man from Grand Forks,” from jail that summer. Poole said that this yet unnamed 77 year old man told Morgan-Derosier that, “He wants him to bring Morgan Derosier’s 19 or 20 year old boyfriend over to his house to give him a massage, according to a transcript obtained by the newspaper.” To continue to quote Poole, “At the time of the defendants arrest, law enforcement asked the boyfriend whether he was aware that the defendant was serving him up to a 77 year old man,” and the boyfriend said, “No.”

Philip Blumel: Holmberg originally denied being the 77 year old man who had engaged in the 72 message negotiation with Morgan-Derosier. Senator Holmberg announced his resignation in March, a few weeks before the full story came out. In an email to The Forum, he made his retirement immediate, “No further comments on this announcement will be forthcoming.” Senator Holmberg has spent 40 of his 77, now 78 years, as a North Dakota legislator and an opponent of the periodic attempts to add term limits to the state constitution. The Associated Press recently provided a partial explanation for Holmberg’s attachment to public office. It turns out that Senator Holmberg ran up travel expenses over the last 10 years that are more than 14 times the average for North Dakota lawmakers. Senator Holmberg took taxpayer funded trips to China, Canada, Europe, and almost 50 US cities. The total bill was about $126,000 for nearly 70 trips between 2013 and April of 2022. The average lawmaker spent $8,700. Holmberg served as chairman of the State Senate Appropriations Committee and the procedural rules committee, as well as on the interim budget section. He was a powerful legislator and seen as the top budget writer in the state. Surely, with no term limits, it is reasonable to expect that, if not for the Morgan-Derosier revelations, that this arrogant and self indulgent Senator, Ray Holmberg, could have continued to run for office with little if any opposition, forever.

Philip Blumel: Thanks for joining us for another episode of No Uncertain Terms. The term limits convention bills are moving through the state legislatures. This could be a breakthrough year for the term limits movement. To check on the status of the term limits convention resolution in your state, go to termlimits.com/take action. There, you will see if it has been introduced, and where it stands in the committee process on its way to the floor vote. If there’s action to take, you’ll see a take action button by your state, click it. This will give you the opportunity to send a message to the most relevant legislators, urging them to support the legislation. They have to know you’re watching. That’s termlimits.com/take action. If your state has already passed the term limits convention resolution, or the bill has not been introduced in your state, you can still help. Please consider making a contribution to US Term Limits. It is our aim to hit the reset button on the US Congress, and you can help. Go to termlimits.com/donate, termlimits.com/donate. Thanks. We’ll be back next week.

Stacey Selleck: The revolution isn’t being televised. Fortunately, you have No Uncertain Terms Podcast.