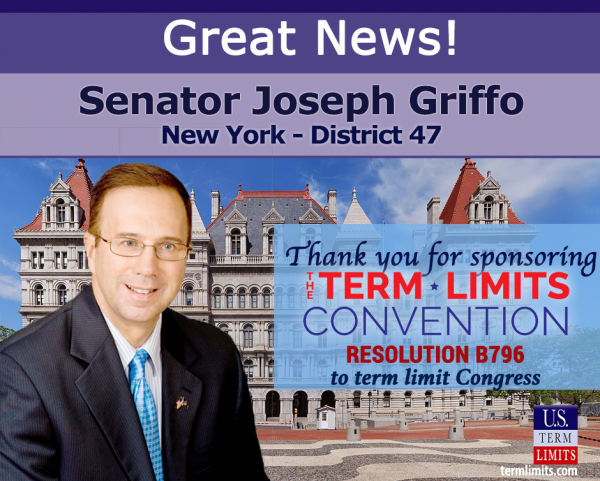 “Imposing term limits, which I have championed since I was first elected to the New York State Senate, will regularly shake up the makeup of government and will reinvigorate the legislative process by bringing in new faces and fresh ideas,” said Sen. Griffo. “I am hopeful that the resolution I sponsored in the New York State Senate will spur action and will fundamentally and dramatically change the culture of our government,” he added.

Through Article V of the U.S. Constitution, 34 state legislatures can team up for a convention to propose a congressional term limits amendment to the Constitution. The Term Limits Convention effort is being shepherded by the nonpartisan, nonprofit advocacy organization U.S. Term Limits.

According to Nick Tomboulides, Executive Director of USTL, “There are two ways to propose an amendment for term limits: through the Congress or through the states at a national convention. That is why it is important to get support from state legislators to call for a convention to discuss the details of the amendment.” Once proposed, the amendment must be ratified by 38 states in order to become part of the Constitution.

Tomboulides notes, “More than 82% of Americans have rejected the career politician model and want to replace it with citizen leadership. The way to achieve that goal is through a congressional term limits amendment.”

According to the last nationwide poll on term limits conducted by McLaughlin & Associates, conducted in January 2018, the issue of term limits enjoys wide bipartisan support. McLaughlin’s analysis states, “Support for term limits is broad and strong across all political, geographic and demographic groups. An overwhelming 82% of voters approve of a constitutional amendment that will place term limits on members of Congress.”

There are fourteen states that have passed resolutions for a national amendment proposal convention specifically naming term limits in the subject. In a divided political climate, term limits for Congress is the one true, non-partisan issue that both President Trump and former President Obama have both publicly endorsed.