Jefferson City, MO — According to a new poll conducted by Scott Rasmussen, term limits remain incredibly popular in Missouri, with voters wanting to see the state legislature advance and defend limits at all levels of government.

The poll, which was conducted statewide from January 6-9, showed that 79 percent of Missouri voters support an amendment to the state constitution that would create 8-year term limits for statewide officials who don’t currently have them, including the attorney general and secretary of state. 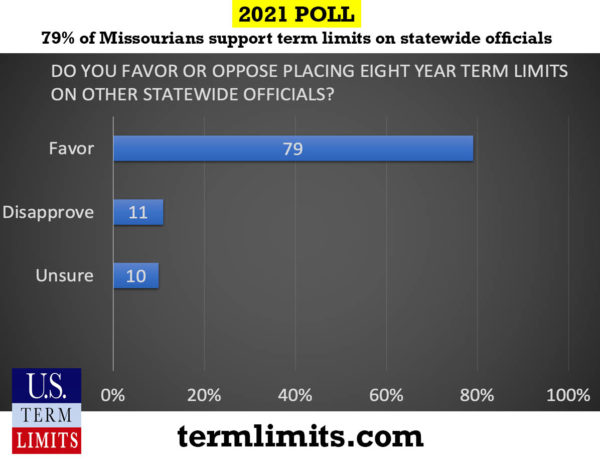 The support level is bipartisan, with 84 percent of Republicans, 81 percent of Democrats and 72 percent of independents voters agreeing statewide officials need term limits

A similar amendment fell short of passage in 2020, but many pundits have noted that the ballot language did not accurately describe the measure as “term limits,” which likely accounted for a significant drop-off in support.

Respondents were also asked about the 2018 resolution the Missouri State Legislature passed, which called for an amendment-proposing convention to term limit Congress.

Overall, 80 percent of voters support this resolution, including 88 percent of Republicans, 79 percent of Democrats and 72 percent of independents.

Finally, the poll asked voters to rate their preference on the proper length of term limits for Missouri state lawmakers. Periodically, some state legislators have suggested revising the current 8-year limit, allowing themselves to keep power longer. The poll showed that voters resoundingly oppose such a change. By a margin of 75 percent to 16 percent, voters prefer an 8-year limit for state lawmakers over a 12-year limit.