Matt Caldwell is a Term Limits Champion. Where do Troutman and Grimsley stand? 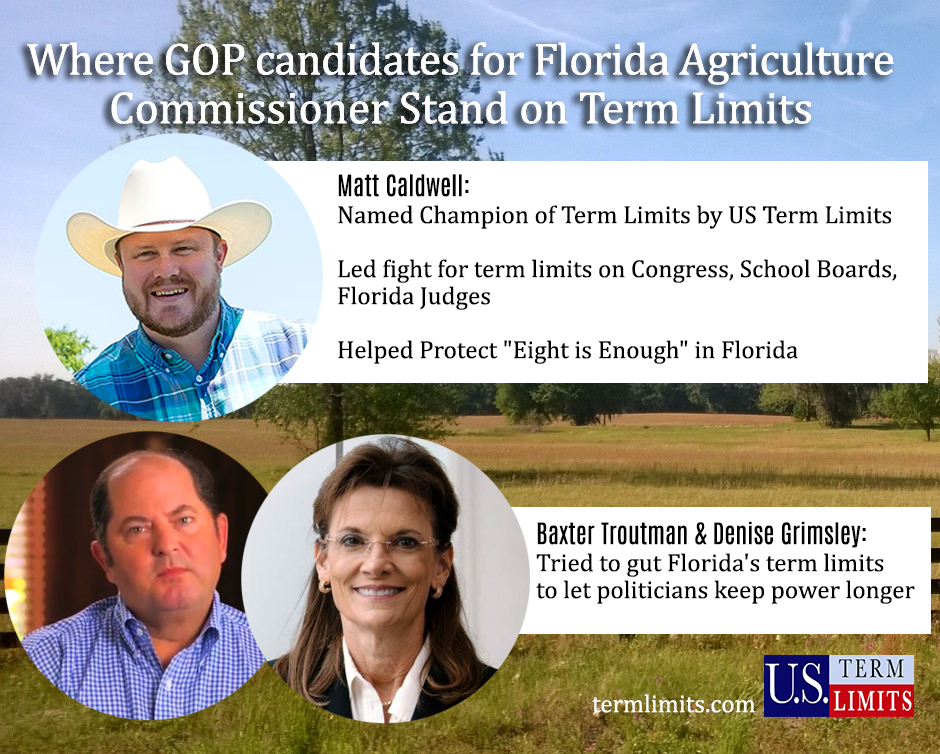 In July, U.S. Term Limits named State Rep Matt Caldwell our 2018 Champion of Term Limits in Florida. During his time in the Florida House, Caldwell has always stood strong for Florida’s term limits while leading the fight to bring citizen leaders to more public offices.

In 2016, Florida became the first state in America to call for the Term Limits Convention, which will allow states to bypass the D.C. swamp and put term limits on Congress. That couldn’t have been accomplished without Caldwell’s leadership in the State House.

Matt also sponsored or co-sponsored bills to apply term limits to state judges and School Board members. This year, for the first time, Florida voters will get to decide whether School Board incumbents should have eight-year term limits.

Both are familiar names to U.S. Term Limits, since neither Grimsley nor Troutman have ever made their secret their disgust for term limits. While in the Florida House, Troutman repeatedly filed bills to demolish Florida’s eight-year limits, which had been established by 77 percent of voters.

In 2005, Troutman successfully sneaked his anti-term limits measure onto the state ballot, only to watch it get yanked from the ballot in 2006 after citizen outcry. It would have lengthened term limits from 8 years to 12 years, handing politicians a lot more power. At the time, Governor Jeb Bush opposed Troutman’s self-serving measure, remarking “that was going down in a blaze of glory.”

Denise Grimsley’s record on the issue is no different. In 2014, Grimsley filed SJR 946, which — believe it or not — resurrected Troutman’s old anti-term limits proposal!!! Grimsley’s bill didn’t get very far because, by this time, swampy lawmakers had learned their lesson about crossing the public on term limits.

There has always existed an unholy alliance in Tallahassee consisting of ambitious politicians, entrenched bureaucrats and powerful lobbyists. All three groups can’t stand it when the term limits “reset” button gets pushed every eight years, shaking up their status quo. Matt Caldwell, by supporting term limits, has always stood up to these special interests.

By opposing eight year term limits, Baxter Troutman and Denise Grimsley have only enabled them.

As a personal favor to me, please share this post with five friends or family members, so they can be informed about which elected officials in Florida support term limits!