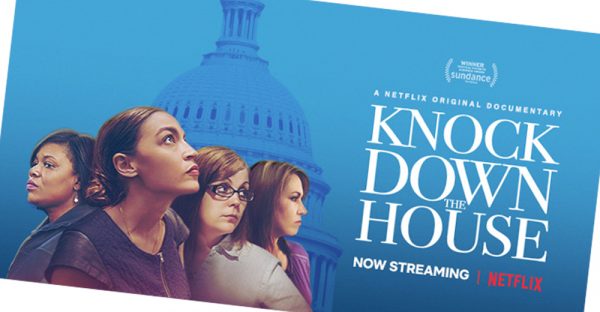 Over the weekend, I suffered through Knock Down the House . . . so you don’t have to.

While the documentary heralding four inexperienced Democratic women running for Congress in 2018 cost Netflix $10 million, I did not have to spend a dime — beyond my regular monthly subscription.

The award-winning film, directed by Rachel Lears, who wrote it along with her husband, Robin Blotnick, is expertly crafted. Unfortunately, it is geared to democratic socialists predisposed to adoring the subjects.

The star is now Rep. Alexandria Ocasio-Cortez (D-N.Y.), who defeated then Rep. Joe Crowley, a ten-term, 20-year incumbent . . . the Number 4 Democrat in the House of Representatives.

“Let’s assume all the energy in this room can get you on the ballot and into office,” offers a fellow at one of Ocasio-Cortez’s early meetings. “How, then, do we overcome the drop in power?”

“I think we really need to have to look at what that power does now,” AOC responds. “When it matters, [Rep. Crowley] doesn’t stand up for us; when it matters, he doesn’t advocate for our interests.”

Whatever one thinks of AOC’s politics, her point here is not without merit: the idea that we citizens benefit from longtime incumbents who ‘bring home the bacon’ is . . . baloney.

* At the completion of this term, Rep. Lacy Clay, Ms. Bush’s opponent, will have served 20 years. His father, Bill Clay, held the seat for 32 years before that. Together, over half a century. The film alludes to the fact that Clay Jr. gained the seat in 2000 only after the surprise retirement of Clay Sr. on the very last day to file for the office . . . with Jr. filing, instead.

Reprinted with permission from http://thisiscommonsense.com/2019/05/20/knock-down-the-incumbency/.