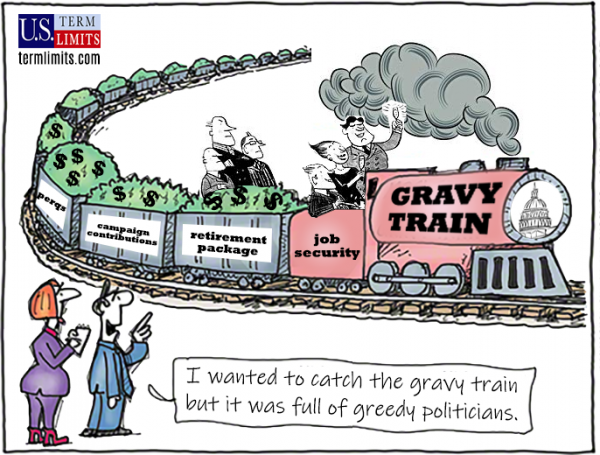 As Director of Digital for U.S. Term limits, I’ve got my ear to the ground on social media to see what everyone is saying about term limits. While for most, this is a no brainer issue, nearly each day people ask “how we can get term limits on Congress when the politicians will never vote themselves off the gravy train?”

The truth of the matter is we don’t need the permission of Congress.

We’re not delusional. We know the turkeys won’t vote for Thanksgiving. At least not unless they think they can sweeten the pot and give themselves a better deal once they see the writing on the wall.

I know many of our supporters just want a national vote on the issue but the Supreme Court took up the term limits on Congress issue and decided it must be an amendment to the Constitution… just as the President has. Which by the way the Congress had no problem proposing an amendment for that!

So, no, we don’t need Congress to get term limits on our federal legislators… but we do need our state lawmakers to take up the torch and support this very important issue. It is precisely for this reason, when Congress fails to act, that it’s the obligation of the states to take on the mantel.

What happens at the convention?

The Article V Convention is a forum for a national discussion. All the states will be invited to send “commissioners” to deliberate what the term limits amendment will look like. They hear from experts. Data will be collected and presented. Experts, statisticians, academics, and governmental consultants alike will have an opportunity to provide input.

After that, the terms of the amendment will be hashed out and agreed upon… or not. The convention is under no obligation to produce any proposal. If a term limits amendment is approved, the proposal will go to the next step in the process where it must be ratified by 38 states to become part of the Constitution.

This national effort is no easy task. While 82% of the people across parties and demographics want this many in the D.C. swamp do not. That is why we need to make our case to the state lawmakers. And what better time than election season?

We are making significant progress. If you feel passionate about putting an end to the dysfunction in D.C., sign our petition at termlimits.com/petition. You see, your state lawmakers will listen to you much more readily than they will to us. Your actions are powerful but the steps you take are easy. Just tell your rep you want term limits on Congress… by email, phone, or in person. And be ready to answer our calls to action when the resolution is moving through your state legislature. The more of you who take action, the sooner we will get this done. Sign the petition up at termlimits.com/petition.