Frankfort, KY — A giant gator will be making an appearance at the capitol in Frankfort, Kentucky on Monday, February 14, 2022. The gator symbolizes draining the Washington, D.C. swamp to get rid of career politicians through term limits on Congress. Volunteers with U.S. Term Limits (USTL) will be hosting a Capitol Day from 9am – 3pm to bring attention to the term limits resolutions they are spearheading through the Kentucky state legislature. The inflatable gator will park in front of the capitol in the morning. Call Aaron Dukette at 859-779-0181 to confirm media interview times. 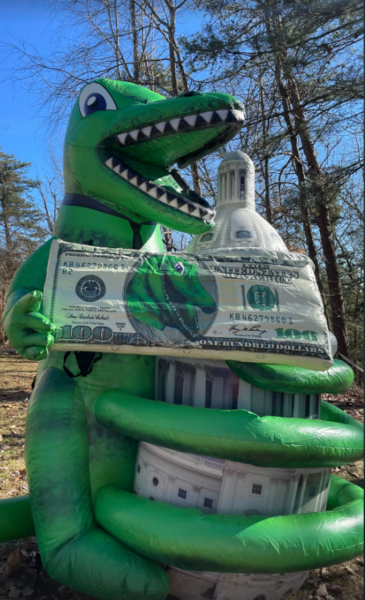 According to the latest poll conducted by McLaughlin and Associates, and commissioned by USTL, Kentucky voters overwhelmingly support term limits for Congress. The poll found that 84 percent of voters approve of a constitutional amendment that will place term limits on members of Congress: 82 percent of Republicans, 85 percent of Democrats and 96 percent of independents.

The survey also found that an overwhelming majority of respondents (80% Republicans, 80% Democrats and 83% independents) were more likely to vote for state legislators who advocate for term limits and would vote against state lawmakers who oppose term limits for members of Congress.

As Ronald Reagan said, “It’s hard, when you’re up to your armpits in alligators, to remember you came here to drain the swamp.”

By using Article V of the U.S. Constitution, 34 state legislatures can team up to call a convention to propose a congressional term limits amendment. Once proposed, it would require 38 states to ratify the amendment to become part of the Constitution.

Those interested in supporting the resolution and following the group’s progress can do so at www.termlimits.com/gator.