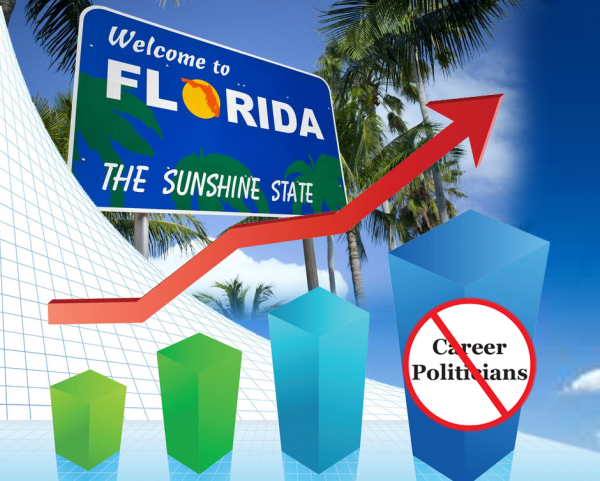 Florida has more term limits on public officials than any other state. To no one’s surprise, Florida’s political class — consisting of politicians, lobbyists and bureaucrats — has never liked the idea. For years they’ve grumbled and groused, blaming rotation-in-office for any small imperfection that might arise. In the wake of study after study showing how great Florida is doing, it’s time for the anti-term limits crusaders to admit they were wrong. It’s time for them to admit term limits have been amazing for the sunshine state.

In the term limits era, Florida has emerged as an economic powerhouse. It has begun to dominate other states in rankings of fiscal health and personal freedom. And citizens are so enamored with eight-year term limits that they’ve started working to apply them to even more offices, like county commissions, judges and school boards.

Each year since I moved from Connecticut to Florida in 2012, I’ve made an annual trip to the State Capitol in Tallahassee to discuss issues with my state legislators. When I started doing this, I noticed right away that Florida lawmakers are different from Connecticut ones in many respects.

First, they seemed to be a lot younger and more energetic. There were more people from my generation (millennial) who understood the culture and environment I grew up in. It felt like talking to a peer rather than some exalted magistrate. Sure enough, the data backed up my hunch; despite Florida having a higher median age than Connecticut, it has a younger legislature. I attributed this to the fact that Florida has eight-year term limits, while Connecticut allows politicians to serve for life.

The Florida folks also seemed less “burnt out” by their jobs, for lack of a better term. They were genuinely excited about the legislation they were working on and weren’t just going through the motions. Most had careers and passions outside of politics, so they were less tethered to the system and didn’t owe a lot of favors. Often, someone I had met the year before wouldn’t be around the next time. That was fine, as they’d be replaced by a fresh face.

“This is citizen government. I like this,” I recall telling myself.

But despite what looked to me like a perfectly healthy system, underpinned by term limits, nobody in Tallahassee would admit that term limits had worked.

“The lobbyists and bureaucrats control everything now,” quipped most legislators and lobbyists, as if they had been programmed in a lab to say that.

“Was that really true?” I wondered. Had term limits taken Florida’s beautiful, unspoiled government and turned it into a hornet hive for special interests?

Hardly. These insiders were spewing nonsense. My first clue should’ve been the identities of the people doing the complaining. After all, why would lobbyists whine about term limits if lobbyists stood to gain power under term limits? Shouldn’t they have been celebrating instead? It just didn’t add up, unless this was some crazed band of self-loathing lobbyists who wanted to reduce their own influence.

It stunk to high heaven. I later learned that lobbyists don’t just oppose term limits; they are actually the chief instigators to try to prevent, weaken and abolish term limits laws. Lobbyists and their clients donate exclusively to anti-term limits campaigns. Former felon megalobbyist Jack Abramoff has even said that lobbyists hate term limits, because they hate losing the control they’ve bought with years of checks.

And what about those bureaucrats? Have they gotten stronger under term limits?

Nope, just the opposite. Since term limits began, Florida’s state government spending has dropped by 22% as a fraction of income. That means, as Florida grows, bureaucrats’ slice of the pie is shrinking. Term limits have also presided over a downsizing of the state workforce, from about 1.25 percent of population to 0.95 percent. The explosion of bureaucracy predicted by opponents of term limits never materialized; in fact, bureaucrats have gotten weaker.

Term limits have never empowered lobbyists or staffers. They’ve only empowered the people of Florida. And we’ve got the studies to prove it.

In the last two years, the Mercatus Center at George Mason University has rated Florida the best state in the nation for fiscal health. That means we have enough cash and revenue to meet our spending obligations and provide a high level of services to citizens. Unlike Congress — which has no term limits — Florida doesn’t spend more than it takes in while incurring long term debt. Mercatus also found that Florida has relatively low unfunded pension and healthcare obligations. Our outlook is very bright!

Florida was no outlier in Mercatus’ research. Their rankings of all 50 states showed that if a state’s fiscal condition was above average, it was more likely to have legislative term limits. States with no term limits, like Illinois and New Jersey, finished at the very bottom of these rankings. Illinois, under the guardianship of supposedly “expert” career politicians, has amassed $200 billion in red ink. Those long-serving politicians even got the state’s bonds downgraded to the lowest level in the history of any state, BBB-.

Next came the ALEC-Laffer State Competitiveness Index, which ranks states based on their tax burdens and ability to attract business growth. This looks at 15 different economic variables, including tax rates, public employee ratios, liability policy and public unions. On the Laffer Index, Florida finished 6th overall and 1st among states with a population larger than 8 million.

Finally, Florida in August of 2018 was ranked as the most free state in America by the nonpartisan Cato Institute. Cato praised Florida’s fiscal policy as empowering businesses and individuals, while noting the advancements the state has made in regulatory reform and personal freedom over the last six years.

Remember: when eight-year term limits were passed, pundits and capitol elites said rookie politicians would run Florida into the ground. Most people who work in Tallahassee are still saying this today. We have watched the opposite happen. Florida is flourishing under citizen-led government while states with career politicians — and Congress — pile up mountains of red ink and careen toward bankruptcy.

It’s time for those so-called experts to admit they were wrong.