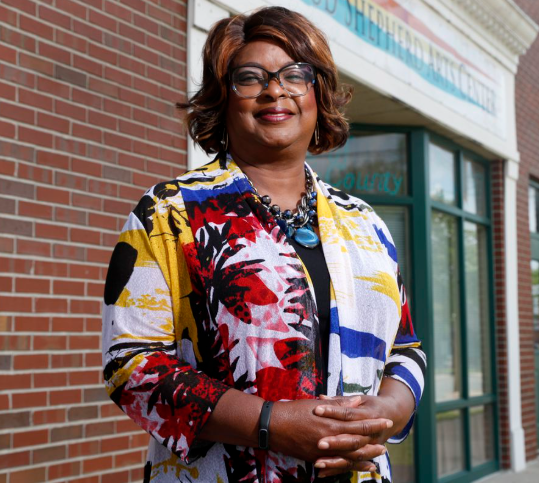 Yesterday, Councilmember Ella Jones was sworn in as Mayor of Ferguson, Missouri. Mayors get sworn in all the time so why is this one of particular significance? Jones is the first black and first woman mayor ever elected to lead the city that reached the national spotlight for racial unrest back in 2014. The city’s term limits opened the seat up, allowing a woman of color to assume the top role.

Ferguson has a population of more than 21,000 people and is part of the Greater St. Louis metropolitan area. It gained notoriety after a black man was shot by a white police officer. Because the city had been suffering from longstanding racial tensions, protests, looting and riots broke out and the police responded with militarization. This sparked more riots in several cities around the country that lasted for weeks.

According to the city’s web site, “The City Council consists of six Council members and a Mayor. Two Council members are elected from each of the three wards, for three-year overlapping terms. The Mayor is elected at large and also serves a three-year term.” The offices are limited to three terms.

Jones was the first black woman elected to the Ferguson city council in 2015. She challenged the incumbent mayor three years ago but lost. This time, Jones’s predecessor was ineligible to run for a fourth term due to term limits. With an open seat, Jones defeated a fellow councilmember in the June 2nd race and makes history at a time when equity, inclusion and diversity are an important concerns. Term limits open up seats offering more choices, more voter engagement, and a more representative government of citizen legislators and administrators.

This reminds me of another open seat election that made history recently. Mayor Lori Lightfoot of Chicago competed against 13 candidates in a race, that according to Ballotpedia, “was the fourth open-seat mayoral race in 100 years after incumbent Rahm Emanuel announced that he would not seek re-election in September 2018. The 14-candidate field was the largest in the city’s history. ”

Without term limits, Chicago used to be under the “Daley Dynasty” where Richard J. Daley was mayor from 1955-1976 and his son, Richard M. Daley, was mayor from 1989-2011. Richard Daley surpassed his father as Chicago’s longest-serving mayor and declined to run for a seventh term. Lightfoot, who did support term limits during her campaign, beat out another Daley (Bill) to become Chicago mayor.