Fair in Maine Sees Nearly 800 New Supporters From writing letters to the editor, handing out literature at events, and asking candidates for their stance on term limits at public events, grassroots volunteers are integral to U.S. Term Limits’ operation. This October, volunteers in Maine staffed a USTL table at Maine’s Fryeburg Fair, the largest agricultural fair in the state, and 2nd largest in New England. Spanning eight days and 185 acres, the Fryeburg Fair sees approximately 225,000 people every year. Getting a table at the fair was a perfect example of what one can do as a grassroots volunteer. Not only did it increase U.S. Term Limits’ presence in the state of Maine by nearly 800 supporters, but volunteers obtained term limits pledges from congressional candidates Mike Perkins (District 2) and Ed Thelander (District 1). 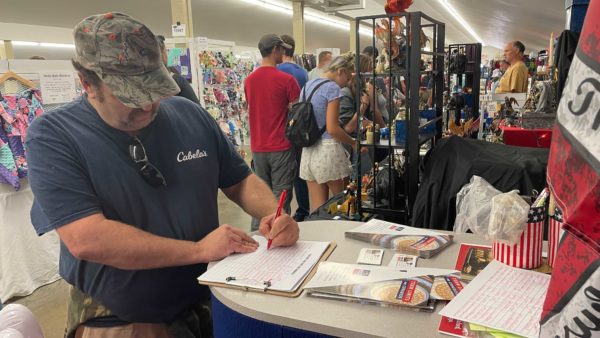 The pledge is their commitment to cosponsor the term limits resolution if elected to the U.S. House in 2022. Kenn Quinn, Northern Regional Director and Maine resident, commented, “The event was a success. Our volunteers had a fantastic time at the Fryeburg Fair speaking with all of the attendees who support our mission.

Nearly 800 people added their names to our petition and all of our TERM LIMIT CONGRESS bumper stickers
were gone by the second day.” He added, “Next year I will be sure to have a lot more on hand to give to
everyone who wants them!” Indeed, we will be back next year, with even more swag gathering more petitions for Mainers who support term limits on Congress.