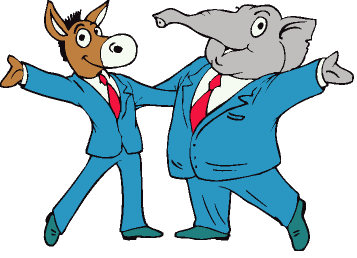 Term limits have always been popular, and the appeal has always been bipartisan. We also observe this bipartisan appeal in legislative bodies where we’ve successfully fought for term limits proposals. Examples include the votes we’ve had for resolutions calling for an Article V Term Limits Convention in state legislatures.

USTL Executive Director Nick Tomboulides reminded us in a recent No Uncertain Terms Podcast that in Florida, it was a Democrat, State Senator Geraldine Thompson, who saved our term limits resolution in committee so that it could then be unanimously endorsed by both chambers of the state legislature.

In the Utah house, a higher percentage of Democrats than Republicans voted for the Term Limits Convention.

In Jacksonville, FL, it was two Democrats, Tommy Hazouri and John Crescimbeni, who saved municipal term limits from an attack initiated by a Republican.

On the other hand, at the federal level — in Congress — term limits are often regarded as a specifically GOP issue. Yet, for many reasons, term limits should appeal to the Democrats at every level of government. Term limits are about fairness and about giving citizens leverage against entrenched elites.

Term limits are no respecter of privilege. They’ve resulted in greater diversity in the legislatures, in everything from race and gender to occupational background. Term limits also limit the power of corporate lobbyists.

So there are a host of reasons that Democrats should be running on this issue. Two new Democratic cosponsors of the U.S. Term Limits Amendment bill recognize this: Joe Cunningham of South Carolina and Lori Trahan of Massachusetts. So do several of the presidential candidates.

Democrats could point out that in the 1990s, the GOP under the leadership of Newt Gingrich made term limits a central issue in the Republicans’ Contract with America, a list of promises of what the Republicans would do if they gained a majority in the U.S. House in 1994. The GOP gained that majority and then — somehow never took effectual action on term limits.

“Hey, look, these Republicans promised you the term limits that you want, and they didn’t deliver. We will.”

How about it, congressional Democrats?

Reprinted from the July/August 2018 issue of the “No Uncertain Terms” newsletter.