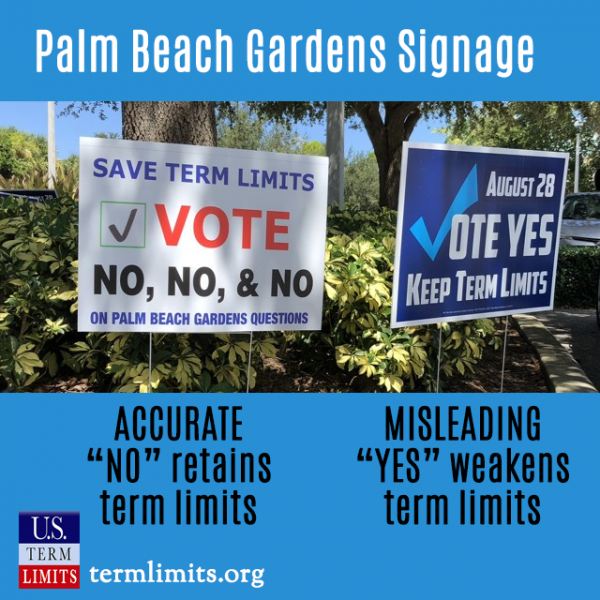 Palm Beach Gardens politicians are at it again, concocting a scheme that would make Dick Nixon blush. The Council is trying to trick voters into approving in the August 28 election a measure to dismantle the two-term limit approved by 80% of city voters back in 2014.

A YES vote would weaken Palm Beach Gardens term limits to let politicians keep power longer. A NO vote would preserve the two term limit implemented by 80% of voters in 2014.

Why would voters ever approve longer term limits, you might ask? The answer is: they never would…unless politicians used a massive amount of deception.

Earlier this year, a Circuit Court judge tossed out the Council’s first anti-term limit ballot measure, calling it “so misleading” that it had to be invalidated. Essentially, the Council had put a question up for voters that sounded like it was enacting a new term limit, while in reality it was just weakening the existing limit — from 2 terms to 3. Circuit Court Judge Joseph Curley spotted the scam and protected voters from it.

But in the aftermath of Curley’s decision, the greedy hucksters who call themselves the Palm Beach Gardens City Council swung into action to come up with an even bigger scam — voters be damned!!

This new Scam 2.0 — the next generation of voter deception — is quite sophisticated. It doesn’t rely on misleading ballot language but rather on misleading yard signs, created to make voters think voting YES would somehow save term limits.

Take a look at the sign on the right above, the one that says “KEEP TERM LIMITS.” This sign is lying to voters, as a YES vote would really destroy term limits. The sign was funded by developers who do business with the city of Palm Beach Gardens. That means taxpayer dollars are being laundered through the City by councilors in order to protect their own jobs. The Council is using the voters’ money to wage an all-out, undemocratic war on the voters. Even worse, the committee trying to stop term limits is called “Voters in Control!”

Of course, self-serving politicians are nothing new. We see them all over America. But this is one of the most egregious examples ever. The Palm Beach Gardens Council has pure contempt for the people of their city. The Council has decided that the $200K it rakes in each year — in terms of salary and benefits — is more important than staying accountable to the public. Council members Carl Woods, Maria Marino, Mark Marciano and Rachelle Litt are drunk on power and determined to keep their cozy jobs.

It should be noted that Councilor Matthew Jay Lane is not part of this corrupt mess. Lane has steadfastly defended the people’s choice of a two-term limit and deserves great recognition for his courage.