I lead America’s largest pro-term limits group. We’ve been involved in more than 500 different term limits ballot drives throughout America. Term limits efforts, by and large, all play out in the same way:

Some tireless group of citizens, fed up with corruption and self-dealing, creates a referendum to enact term limits. People in the community are always thrilled! Term limits, after all, is the most popular and bipartisan issue in America. It’s supported by supermajorities of Republican, Democratic and independent voters. Term limits enable fresh voices and ideas to enter government.

But not everyone is excited. The local political elite – those facing the prospect of losing their pay, privilege and perks – always become triggered. They mobilize their political machines to sabotage the term limits effort. They ask their lobbyists, staff, bureaucrats, campaign managers, family members and friends to pose as grassroots activists, to make it appear as if it is a 50-50 issue (Spoiler alert: It’s not). They create competing, phony ballot measures to confuse voters. And finally – after voters are finally able to vote and put the term limits nail into the career politicians’ coffins, these snake oil salesmen do something egregious: they start scheming to repeal the term limits that just passed!

This is the scenario playing out in Arlington right now, and it is one I have witnessed time and time again all over our country. It is dishonest, underhanded, and offensive to the very notion of a republic.

The Arlington City Council is currently attempting what we refer to as “the committee scam.” Believe it or not, this con job is so common, we actually have a file on it at our U.S. Term Limits’ Headquarters. It begins when a pack of politicians wants to rip apart their own term limits – in order to keep power – but also wants to shirk blame for undoing the people’s will. So they create a so-called “independent” commission to tell them exactly what they want to hear: that term limits are horrible and need to be shredded.

Since the commission was hand-picked by the Council, it has no independence whatsoever. In fact, a middle school student would flunk a test for not noticing the conflict of interest in this scenario. But the politicians never relent; they love power, and will do anything, and everything they can to never give it up.

The rationale for Arlington’s “Term Limits Advisory Committee” is absurd, as it is working to find fault with a term limits law that is less than two years old. In fact, it was created before two-thirds of Arlington voters passed six-year term limits in November 2018. In fact, its very existence was premeditated by the politicians own self-interest in staying in power. It was created prior to over two-thirds of Arlington voters coming together at the ballot box to enact six-year term limits in November 2018.

Comments from the committee’s hand-picked appointees have been predictably hilarious. Member Jim Maibach said “it’s so undemocratic and un-American to have lifetime bans.”

Maibach might want to ask his American history teacher for a refund. Thomas Jefferson and Benjamin Franklin believed in term limits, with Franklin favoring a three-year limit, even shorter than what Arlington voters passed. And of course, the U.S. Constitution imposes a lifetime ban on the President after eight years. Do local officials in Arlington need more time to learn their jobs than the leader of the free world? That very suggestion is the height of arrogance. 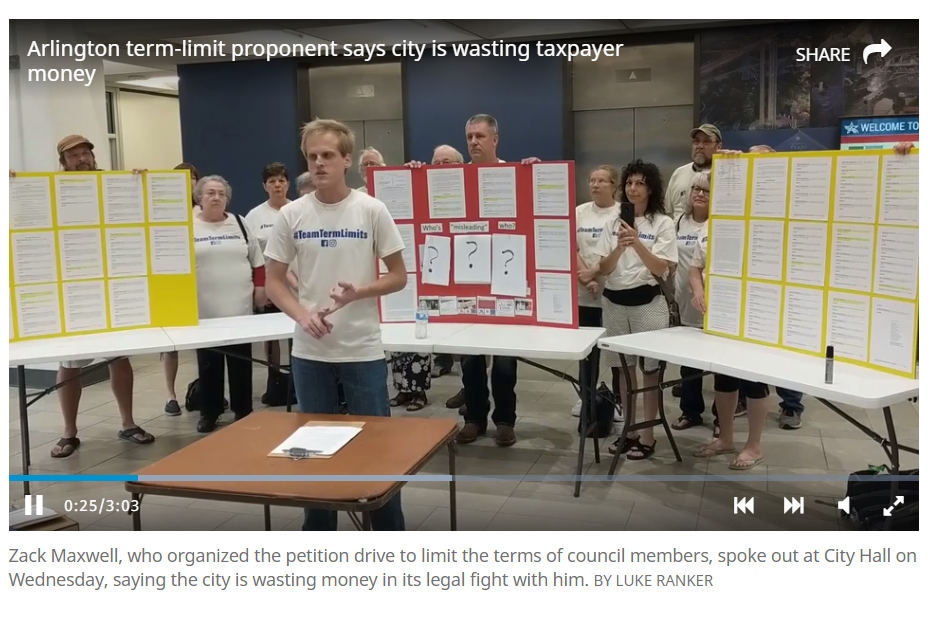 We stand with the people of Arlington who won their David vs. Goliath fight to enact term limits in 2018. Know that what you’re seeing now is a common response when politicians see their power slipping away. Keep up your fight for term limits. Never believe the ridiculous and self-serving claim that only 9 individuals in a vibrant city of 400,000 are qualified for public service. We stand with you.

Nick Tomboulides is the Executive Director of U.S. Term Limits, a national non-profit organization that fights for term limits at all levels of government.