“Here’s the difference between me and the other candidates,” says billionaire investor-turned-presidential aspirant Tom Steyer. “I don’t think we can fix our democracy from the inside. I don’t believe Washington politicians and big corporations will let that happen.” 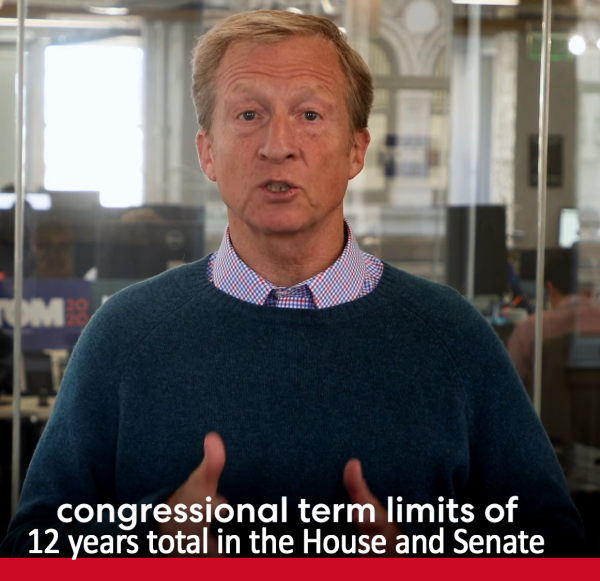 Of course, if this Democrat becomes president of these United States, that’s hardly the outside.

“For me,” Steyer continues, “this comes down to whether you trust the politicians or the people.”

Well, I certainly trust the people a whole lot more than I trust the politicians.*

“If you say you trust the people, are you willing to stand up to the insiders and the big corporations and give the people the tools they need to fix our democracy?” Steyer asks.

The toolkit’s a mixed bag.

Mr. Steyer also worries that, without reform, “We won’t be able to . . . pass any of the great plans proposed by the Democratic candidates running for president.”

We should be so lucky.

Still, here is another Democratic presidential candidate endorsing congressional term limits. And we do need a direct democratic check on Washington, the ability for citizens to initiate reforms such as term limits and take unpopular legislation to a referendum.

I’m not sanguine that Steyer will get the policy details right, but as fellow Democratic candidate Sen. Kamala Harris is fond of saying, “Let’s have that conversation.”

reprinted with permission from http://thisiscommonsense.com/2019/07/17/a-different-conversation

* Constitutional protections for our basic rights, as in The Bill of Rights, mean we do not have to trust government, directly democratic or representative.