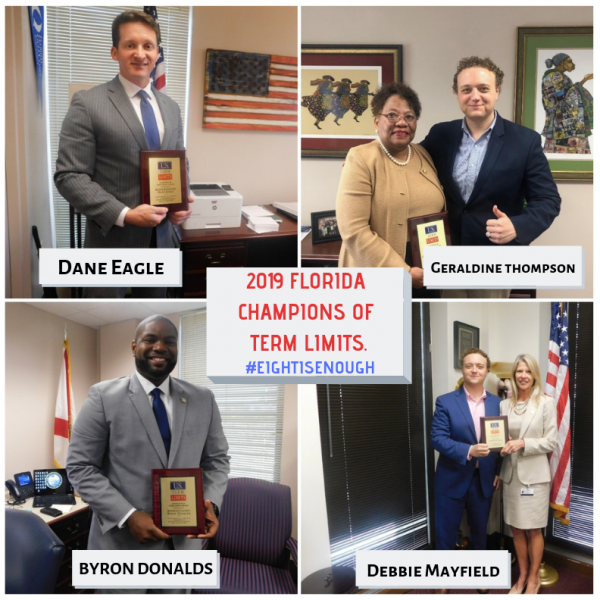 The award recognizes “a steadfast commitment to restore citizen government through term limits,” and is presented only to lawmakers who have taken a strong stand on the issue. “Florida is without question the term limits state,” said U.S. Term Limits Executive Director Nick Tomboulides. “Our rejection of career politicians – and commitment to 8-year limits on so many offices – has helped establish our state as an economic powerhouse. Term limits have produced leaders who are more diverse, more fiscally responsible and more accountable to the people.”

All the honorees have signed pledges vowing to protect 8-year term limits in Florida from lobbyist-led efforts to lengthen or repeal them. Some, like Senator Aaron Bean and Representative Geraldine Thompson, previously played key roles in helping Florida become the first state in the nation to call for congressional term limits in 2016*.

Tomboulides hailed the bipartisan group for supporting term limits. “It takes guts to stand up to the special interests that prefer Florida had no term limits. We applaud these members for listening to the people,” he said.

* The initial publication of this release indicated that Florida passed its term limits proposal convention application in 2015. It was, in fact, passed early 2016.

###
______________________
U.S. Term Limits is the largest grassroots term limits advocacy group in the country. We connect term limits supporters with their legislators and work to pass term limits at all levels of elected officials, particularly on the U.S. Congress. Find out more at termlimits.org.
Share on FacebookShare on Twitter