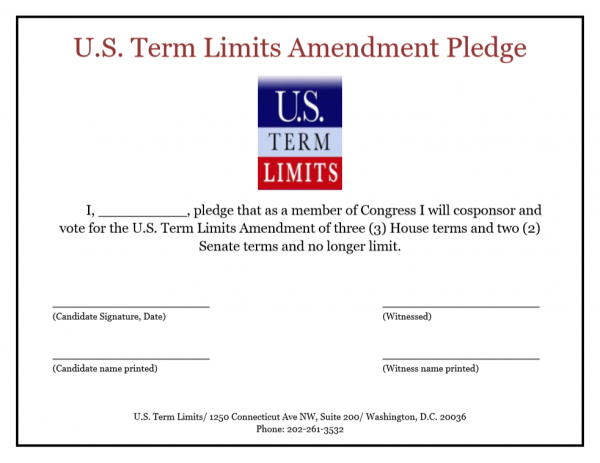 In 2019, there will three special elections to fill vacant U.S. House seats. In two of the three races, the candidates have shown overwhelming support for limiting the terms of our federal legislative branch. And more signers are yet to come.

Yes, even candidates for Congress know how critical it is to end the political careers of lifetime service in the U.S. House and Senate.

Each of the candidates listed here has signed the U.S. Term Limits Congressional Pledge.

It reads, “I pledge that as a member of Congress, I will cosponsor and vote for the U.S. Term Limits amendment of three (3) House terms and two (2) Senate terms and no longer limit.”

There are nearly 70 pledge signers in the current 116th Congress. Each has vowed to support the resolutions sponsored by Sen. Ted Cruz (SJR1) and Rep. Francis Rooney (HJR20) in support of proposing a term limits on Congress amendment to the U.S. Constitution.

The vacancy in PA CD-12 follows the resignation of former Rep. Tom Marino on January 23, 2019, who entered the private sector. The election will be held May 21, 2019. The following candidates have signed the U.S. Term Limits pledge:

The special election will fill the vacancy left by U.S. Rep. Walter Jones, who died on February 10, 2019. Primaries are scheduled for April 30, 2019. The general election is September 10th. The following candidates have signed the U.S. Term Limits pledge:

No winner was declared in the NC 9th Congressional District race in November 2018 due to allegations of absentee ballot fraud. A primary election is scheduled for May 14, 2019 with the general election slated for September 10th. The following candidates have signed the U.S. Term Limits pledge:

There is at least one other special election but it won’t be held until November 3, 2020. The victor will complete the rest of the 2017-2022 term of Senator John McCain who died on August 25, 2018. Currently, the seat is held by term limits pledge signer Sen. Martha McSally, who was appointed to the position by Arizona Governor Ducey.